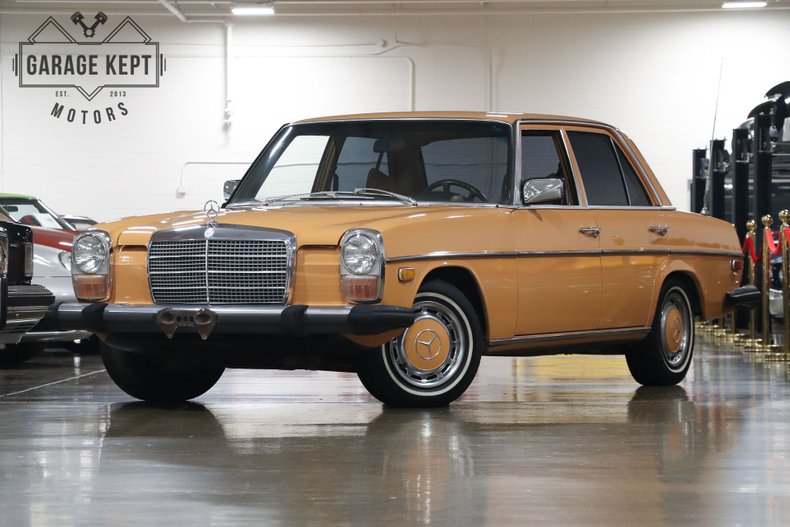 (Please note: If you happen to be viewing this 1975 Mercedes 300D sedan on a website other than our Garage Kept Motors site, it's possible that you've only seen some of our many photographs of this vehicle due to website limitations. To be sure you access all the more than 150 photographs, please go to our main website: GarageKeptMotors.)

“The 300D is the car everyone is thinking of when Mercedes reliability is mentioned, as these cars are the primary reason for that reputation.” –European Car, 6/1/05

The Mercedes 300D was clearly a favorite of the automotive press. In January of 1975, Road & Track reviewed the then brand new Mercedes 300D under the headline “The Astonishing 5-Cylinder Car.” Summarizing that review, the Curbside Classic writer, Paul Niedermeyer, noted: “The 300D was the first Mercedes diesel to use a new governor system to control the diesel injection pump, which improved response to the accelerator pedal. And due to careful balancing and special motor mounts, it was deemed to be closer to the six in its vibrations than the four. Mercedes' success with their five was soon followed by Audi doing the same thing with their engines. The Germans had found a solution to satisfying the power-hungry Amerikaner by adding one more cylinder.Of course, objective performance was still leisurely; 0-60 in 20 seconds. But in normal daily driving, that wasn't really all that bad. The 300D would keep up with traffic quite nicely, and once up to speed, did very well on the highway. R&T got theirs up to a whopping 98 mph!” Commenting on the car's build quality and reliability, another reviewer of the Mercedes 300D put it this way: “You better like the color, because you could easily end up owning the car for a long, long time.”

This example in its original Mercedes yellow (a color demonstrating a certain “joie de vie”) has definitely been well loved by its joyful caretakers over the years. The 142, 000 miles on the odometer were added at the sedate, respectful rate of roughly 3,500 miles per year. The condition of every surface—paint, chrome work, colored hubcaps outside, and MB Tex vinyl upholstery, dashboard gauges, and carpeting inside—demonstrates the love bestowed on the car. The car's mechanical systems, including its floor-shifted automatic transmission and air conditioning, all perform as intended. Sitting behind the beautiful Mercedes steering wheel in this car's solid cabin, it's hard not to feel special. While not a performance car, the 300D was the definition of “classic yet practical.” That's still true today.

Short of an in-person inspection—which we are happy to arrange by appointment—the best way to fully appreciate the condition of this 300D is to carefully review the more than 150 photographs and short walk-around video at the GarageKeptMotors site. Pay particular attention to the condition of the body pain and the absence of re-painting evidence under the hood and surrounding the factory stickers. In similar fashion, note the condition and completeness of the engine compartment and the absence of anything but surface rust on the undercarriage components. This car rightly wears its vertical 3-pointed-star hood ornament with pride and timeless style.

Something tells us that owning this Mercedes for tens of thousands more miles and many more years will continue to pay “joie de vie” benefits long into the future.