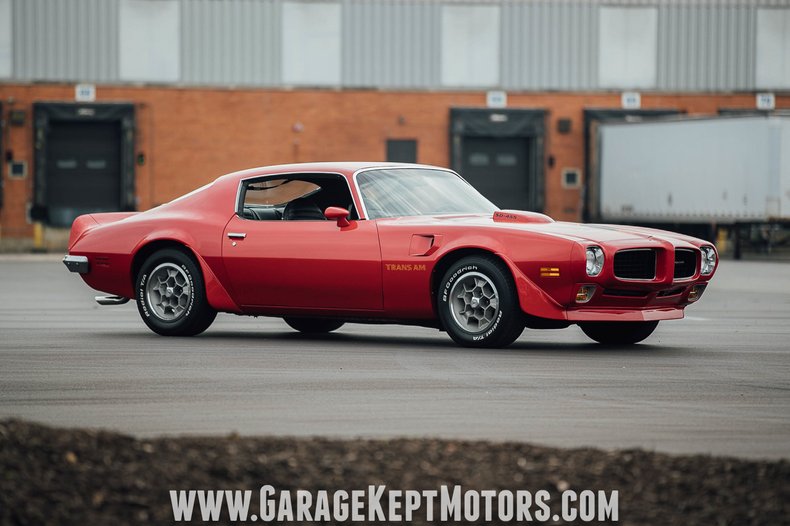 What makes a classic car collectible? A big motor? Limited production? Long-standing ownership? Or is it because the “car guys” of that era just agreed it was that cool? Well, this particular vehicle checks all those boxes and then some. This is the coolest car that Pontiac ever made and they didn't make many. 252 to be exact. Oh, and just one man has owned it since new. He ordered it to spec on March 27, 1973.

Our client, a local West Michigan enthusiast, was debating on buying a new car or picking up a slightly used 1965 Shelby Cobra. By 1973, the prices on the real Cobra's were pushing $9k, which was more than he wished to spend (if we had a time machine, right?). Luckily for Pontiac lovers, he walked into VanDerZee Buick-Pontiac of South Haven, Michigan in the spring of '73. In our possession and accompanying this acquisition, is the original, hand-written Bill of Sale, signed by dealership owner, Raymond VanDerZee. We also have the original title, dating back to January 11, 1977, the day he paid off the lien. The base price of the car was $4,203.75 with a $48 destination fee added on top. However, after a laundry list of added options, including the most important Super Duty Engine, the total delivered price came to a staggering $5,027.20. Pontiac installed that engine, their top performance powerplant, in only 251 other vehicles. At the time, our client knew he had ordered a nicely optioned automobile but no one could predict how special that car would end up being. Five months later, he took delivery of his brand new Trans Am the first week of August, 1973.

As we handle all claims of originality, we had to prove it. Especially on a car this rare. The one-owner piece is right as rain. That part of the story is unshakable. But what about the numbers? To confirm it really is ALL there, we hired John Hansen of Michigan Automotive Inspection Services, to crack the code, if you will, of any discrepancies in the engine, transmission, and differential casting numbers. He proved his worth in gold as he verified ALL of the numbers are correct. Note the photos of his report in the listing. Mr. Hansen even used a borescope camera to verify a hidden VIN stamping behind the firewall. There is nothing here that shouldn't be.

Since 1973, our client has owned this Super Duty TA with pride. It has 53,394 original miles. In every mechanical and cosmetic overhaul, he has ensured the vehicle was put back together to factory specifications, by professionals. VanDerZee Pontiac installed a new water pump in 1976, Holland Transmission rebuilt the transmission in the late 1990's, Hudsonville Auto did a complete repaint in 1995 with new decals, St. Steel Muffler in Pennsylvania rebuilt the exhaust system in 2000, Seats were reupholstered in 2008 and radiator replaced in 2012, and D&R Drivelines rebuilt the rear axle in 2010. Fluids were meticulously regulated and is currently running on Mobile1 10w30. The car fires on command, runs extremely well, and remains a blast to drive, as it was 46 years ago off the VanDerZee lot. Be sure to check out the video to hear this SD's exhaust notes.

Included with the purchase of this special car are the original Owner's Manual, Operating Instructions Book, Maintenance Schedule Pamphlet, PHS Documentation, Original Title, Original Bill of Sale, MAIS Report, and Original 1973 Dealer Service Bulletin. The car itself and its low production numbers is incredible, yet combine that with an actual, one owner history, and you have a true unicorn on your hands. We encourage you to find another one like it. A true piece of American Muscle Car history, brought to you by iconic Pontiac (R.I.P.). What an amazing vehicle and we are honored to represent it. Be sure to check out all the photos and video on our main website: Garage Kept Motors. Call if interested or e-mail with any questions. Thank you for looking.