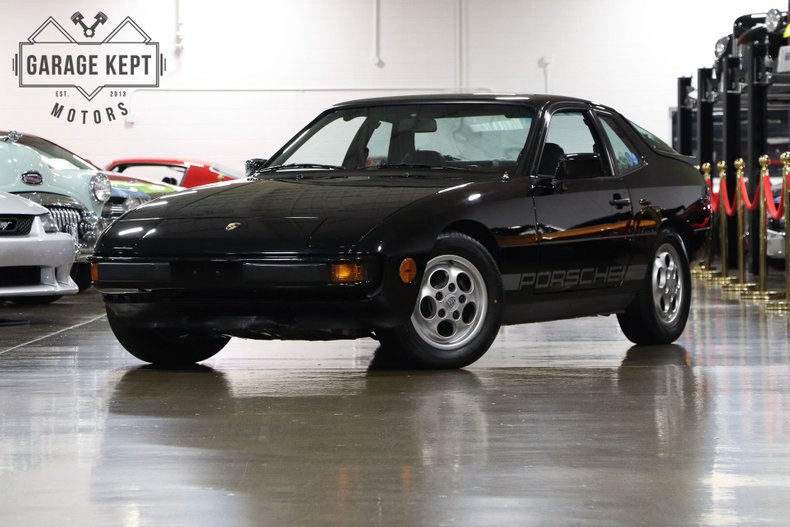 “Now you can have as much fun on the freeway as they've been having on the Autobahn.” – Headline for Porsche advertisement launching the 924S

Porsche enthusiasts know that adding an “S” to any of their models' nomenclature signaled something special in the performance department. In 1987, when the 924S appeared, the changes under the hood took an already excellent-handling sports car, and added the power it needed to be “a real Porsche.” For just two model years, Porsche replaced the pedestrian Audi-created 2-liter engine, with a 2.5-liter 4-cylinder powerplant, the same engine had been the basis for the successful 944 model. Horsepower in the 924 shot up by nearly 50% to 147 while the car's 50-50 front-rear weight distribution remained unchanged. The result: something definitely special in the performance department.

The black-black 924S offered here was consigned by an enthusiast and collector who has owned six Porsches, two of them 924S models. His focus is not on concours, garage-queen cars, but rather on well-maintained examples that have been returned to their original 1980s driving characteristics. Achieving this level of reliability invariably involves replacing a host of components on a 32 year-old car, and that is certainly the case here. He replaced all of the following on this 924S: driver's side mirror, clutch master cylinder, clutch slave cylinder, front brake rotors, front brake pads, brake lines (upgraded with stainless steel lines), rotor, distributor, spark plugs, spark plug wires, ignition coil, timing belt (with tension set using the highly regarded ArnWorx tool), water pump (w/new gaskets), fuel tank, fuel filter, fuel pump, fuel-level sending unit, power steering pump, power-steering hoses, coolant-recovery hose, power-window interior switches, and sunroof operating gears. This work is all fully documented in an accompanying binder which also includes a variety of model-history articles, the Porsche Panorama magazine from the launch of the 924S, various road-test articles, old ads—including a copy of the ad mentioned above showing an identical black car—and a framed original Porsche sales brochure dedicated to the 924S model.

In addition to its impressive list of maintenance, the car's cosmetic condition is excellent. These cars had fully galvanized bodies, so there is no body rust at all. The single-stage black paint is factory-original with only minor touch-ups made to eliminate road rash. A sole noticeable small dent (just above the “924S” logo on the rear hatch) is the largest flaw. The “phone-dial” style original alloy wheels were refinished by a prior owner, and a new set of Dunlop SP5000 tires in the OE size was mounted in 2017. “Porsche” side-stripe graphics in muted gray, matching the factory's lower-sill paint, have been professionally applied (they are vinyl, and could be removed easily by the new owner if desired). Inside, the original Porsche-script upholstery is very well maintained. The original and relatively rare 4-spoke steering wheel (Option code 431) identical to that used in the Porsche 959 and of similar style to the 911's wheel at the time, is in place. A dash cap has been professionally installed. A fully functional period Blaupunkt radio is installed (it does crackle but only momentarily at turn-on). The tilt function on the roof operates as it should, as does the hatch-release mechanism. The car's actual mileage is some 32,000 miles fewer than the approximately 82,000 shown on the odometer. This is due to a fully documented June 6, 2007 odometer change by the prior owner using a higher-mileage replacement. The legally required odometer-change sticker is present on the car, and the stamped service records of the change are also included. Two keys, some spare parts (including the front license place mount), and a black Porsche leather keychain come with the car.

As referenced earlier, our consigner aims to return his Porsches to their 1980s-level performance characteristics, and this 924S is an excellent example. The car just completed a more than 750-mile road trip, including the MotorGearo250 Wisconsin road rally. It cruised at 80 mph on the highway as adeptly as it handled the curves on the rally course. It's ready for many more miles of enthusiastic Porsche-driving ahead, in the hands of its new owner.