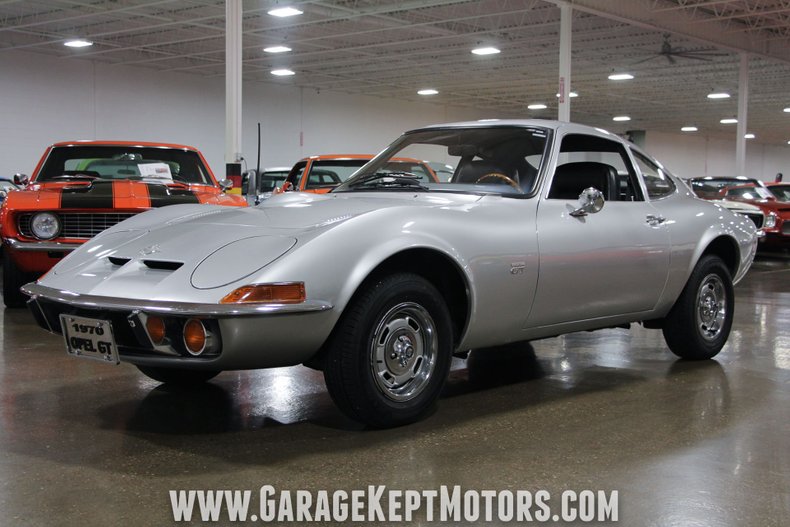 (Please note: If you happen to be viewing this 1970 Ope; GT on a website other than our Garage Kept Motors site, it's possible that you've only seen some of our many photographs of this vehicle due to website limitations. To be sure you access all the more than 150 photographs, please go to our main website: GarageKeptMotors.)

In the late 1960s, the noticeable sports-car gap in the Opel model lineup was filled with the Opel GT. However, actually creating this relatively low-volume “halo” car designed to lift the Opel corporate image in Germany as well as give Buick dealers in the U.S. an imported sports car to grace their showrooms would be no simple matter. In the end, it would take none other than GM's legendary Bob Lutz's blessing, and a combination of design from America, mechanicals from Germany, and body fabrication from France. (French carrosserie Chausson fabricated the unibody shells that Brissonneau & Lotz finished, inside and out and shipped them from Paris to Opel's plant in Bochum, Germany.) The resulting Opel GT was among the first true “world cars.”

Automobile Magazine's “Collectible Classic” feature described the car's design: “The end product offered an exceptionally smooth nose finished with a delicate, 'Vette-style chrome blade bumper (federal bumper standards were still years away). Oval hideaway headlight housings that rotated up from left to upright, clockwise as you face the car, are controlled manually by a lever that makes for a great conversation piece and a nice workout for the driver's right forearm. As in first-generation Corvette Sting Ray coupes, the doors extend into the roof for comparative ease of entry. Out back, the tail was Kamm-styled and set off by four round lights, recalling the Dino by Ferrari. Trunk is a relative term when discussing the Opel GT, as there's no external access.” The car's rear also features a racing-inspired external fuel-tank access and dual center exhaust pipes.

The silver-over-black 1970 Opel GT offered here features the larger of two engines offered, an original 1.9-liter 4-cylinder. powerplant. The car was originally owned in California before ultimately making its way east. It was restored in Wisconsin in 2008 where the car's original 4-speed manual transmission was swapped for a more reliable, and far less problematic, Getrag 5-speed. Our Michigan client acquired the car in 2012. Recent service performed at Arie Nol in Grand Rapids included a new muffler, tires, and a new fuel-sending unit.

This Opel GT is rare enough to be a real head-turning hit at any cars-and-coffee enthusiast gathering. But its real gift is its ability to transport its driver back to the Seventies when sports cars were just beginning to blossom in the U.S.