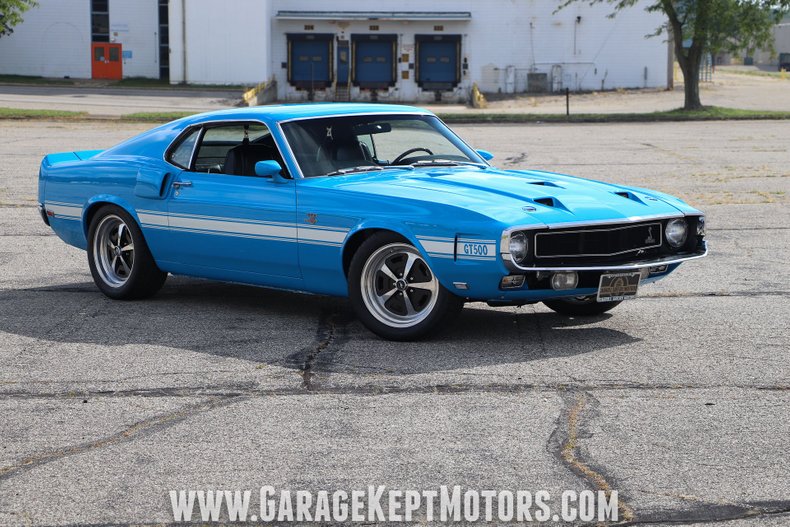 (Please note: If you happen to be viewing this 1959 Shelby GT500 on a website other than our Garage Kept Motors site, it's possible that you've only seen some of our many photographs of this vehicle due to website limitations. To be sure you access all the more than 150 photographs, please go to our main website: GarageKeptMotors.)

“…the last Shelby GT500 of the “classic” era. It rounded out an ultra-high-performance Mustang product line for the '69 model year that will probably never be matched for sheer brute force.”

Some cars automatically generate fits of wild imagination. This is one of those cars, so…

Imagine it's the spring of 1969. Sometime after Richard Nixon's January inauguration as the country's 37thpresident, but before Neil Armstrong becomes the first man to walk on the moon in July. Beatles and Credence Clearwater Revival tunes were playing from 8-track tape players. The Woodstock Music & Arts Festival was set for mid-August.

Imaginary you is a 20-something wearing a turtleneck and flared pants and sporting a leather jacket. It's a lazy Saturday and you find yourself in the showroom at Fuller Ford in Cincinnati. "Just browsing" you tell the sales guy. Suddenly, you see it! And in the parlance of the times, your mind is blown. It's nirvana on four styled-steel wheels: the all-new 1969 Shelby Mustang GT in a color they call “Grabber Blue” for good reason: It definitely grabbed you. And right after the “GT” on the car's side-stripe, you can't miss the magic three numbers 5-0-0. You're spellbound. Sure enough, the fender badges confirm it: “Shelby Cobra Jet 428.”

The pleasant Ford sales guy sees your starstruck gaze and offers to lift the car's hood. As he does, you notice the sole grill badge bearing the Shelby cobra logo, and marvel at the three NACA hood air ducts, something that's never been seen on a car before. The massive 428 cubic-inch engine fills the space beneath and sports a wide-open Cobra Jet Ram-Air air-cleaner assembly atop. Forged valve covers are prominently stamped “Cobra Le Mans.” Serious business here.

You walk around the side to peer in the driver's window, and think to yourself “This is exactly how I'd have wanted mine!” Black vinyl high-back buckets with the perfect accent touch of red, beefy automatic shifter on the console with auxiliary oil-pressure and battery-condition lighted gauges, Shelby-snake-logo on the wood-rim steering wheel, power disc brakes, fold-down rear seats, integrated roll bar, wood trim on the dash and door panels, great big analog clock directly in front of the passenger seat. Underneath the car, the dealership has placed a large mirror so you can see the full length of the separate dual exhausts exiting in the center of the car through side-by-side rectangular openings at the rear. You imagine the music they'd produce. Sweeter even than CCR. More than that, you imagine owning this beautiful Shelby.

Okay, wake up! At Garage Kept Motors, this car is no imaginary, unattainable dream; it's here in the metal. Fully and faithfully restored, documented in every respect by an accompanying Marti Report (verifying it's one of just 418 Grabber blue examples), unaltered data plate with the mysterious “5” seemingly in the color code (but not really as it simply indicates the Mach1 hood present on these cars before they became Shelby creations). During the restoration process, the R Code engine was professionally rebuilt; the car's suspension was rebuilt; Willwood brakes were added; and the exhaust system was replaced. (All original parts removed from the car are included in the sale.)

This Shelby GT500 is as real as it gets and we are honored to offer it to the discriminating and fortunate collector who will soon own it ,and become its next caretaker, perhaps for the second fifty years of its historic life.

One caution: Don't daydream too long. We're pretty sure we will never see this car's equal pass through our doors again.