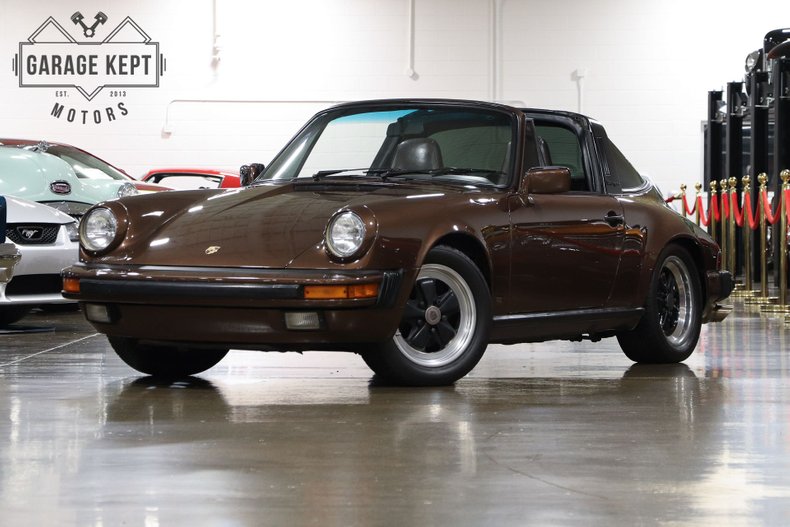 (Please note: If you happen to be viewing this 1985 Porsche 911 Carrera Targa on a website other than our Garage Kept Motors site, it's possible that you've only seen some of our many photographs of this vehicle due to website limitations. To be sure you access all the more than 150 photographs, please go to our main website: GarageKeptMotors.)

The mid-eighties Porsche 911 remains prized today for its taut feel, remarkable build-quality, true sports-car handling, and not least of all, its absolutely classic 911 look. “There's no other shape so pure and simple” is how Motor Trend put it. While more recent-vintage Porsche cars have brought computers, luxury trappings, and a host of technology to the 911 platform, there is no denying the gut-level appeal of the early Carreras.

In 1985, the highly regarded 3.2-liter Porsche flat-six boxer engine (with 80% new parts compared to the predecessor 3.0-liter powerplant) was in its second year. No longer was the car labeled an “SC.” The new moniker for the legendary sports car was “Carrera.” Horsepower was up 14% to 207, and 0-60 times were down to the mid 5-second range, respectable even by today's standards. Handling remained a Porsche strong suit and, as Motor Trend put it: “…Carreras ride beautifully over all but the worst pavement….” Power 2-piston ventilated disc brakes at all four corners brought the cars to a halt swiftly and predictably. While the Getrag 915 5-speed gearbox in the '84-'86 models would be replaced by the G50 version two years later, many Porsche purists to this day continue to praise the solid mechanical character of the 915.

The 911 Carrera Targa offered here possesses some distinctive charms of its own. Not least among them is its color combination. The exterior paint code “492” denotes "Nutmeg Brown Metallic," a lovely shade that the rennbow.org website (the recognized authority on Porsche paint) gives a high “4 paint can” rating for rarity. Overall, Porsche's brown-paint hues are highly sought-after as a result. It's worth noting Nutmeg Brown Metallic was the only brown choice offered from the factory in 1985. What's more, from 1991-2012 Zuffenhausen offered no brown paint of any shade as a factory selection on any of its models. This Targa has at some point been treated to a re-spray which, from the color-match within the door jambs and engine compartment as well as the overall luster and uniformity, appears to have been performed with a very high degree of quality, and in the car's original shade.

The complementing dark-brown interior leather (also a rare choice) shows a patina due its age (and a seam separation in the driver's seat cushion); the color appears to be Porsche's “Cadbury Brown,” apparently a name chosen with a nod to the chocolate maker. Two cracks in the color-matching dashboard are evident. The gauges all feature clear, unscratched faces and crisp lettering. The likely-original brown carpeting is in very good condition. The Targa top is in very presentable condition; it has almost certainly been restored. The only obvious aftermarket addition is the audio head unit with MP3 capability.

The car wears 16-inch Fuchs black-spoke staggered-width forged wheels shod in 205/55 ZR16 (front) and 225/50ZR16 (rear) BFGoodrich g-Force high-performance tires. Its engine bay is tidy. The air-conditioning compressor is not connected, a not-uncommon owner's decision for a 911 of this vintage. The undercarriage displays no signs of abuse; the front valance is free of damage, body sills show none of the damage common from improper jacking, and suspension components all appear original and undamaged. Recent services, including a valve adjustment, are up-to-date. The car is a pleasure to take out on the road and runs strong.

This 911 Carrera Targa was almost certainly treated well by what appear from the Carfax to have been its three prior owners. At 206,000 miles (roughly 6,000 miles per-year on average), it is further proof that Porsche builds cars designed to last. The handsome color combination on this Targa similarly demonstrates that the Germans knew how to create beautiful sporting automobiles. Whether its next owner is a driver or collector (or both, as is pretty common for Porsches), they're sure to find this is a 911 offering many years, and many miles of joy ahead.