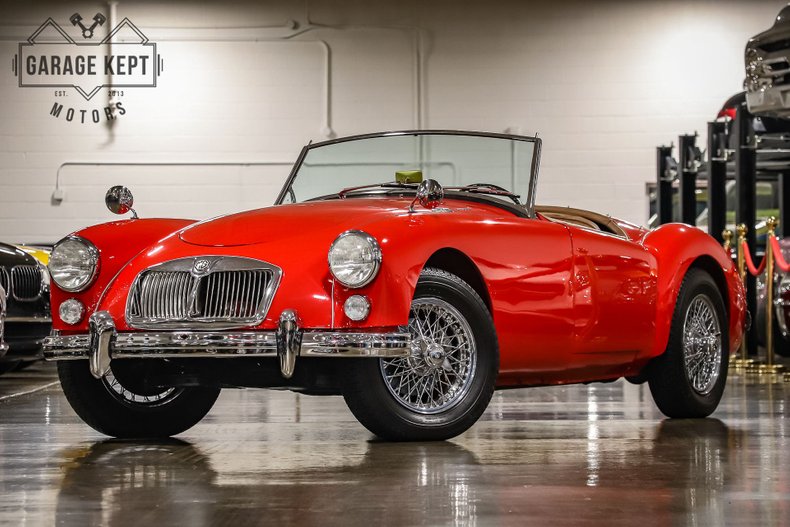 The period review quoted above went on to rave about the launch of the MGA 1600 Mk II: “No popular , mass-produced sports car has ever stood the test of time quite so well as the M.G. Car Company's MGA. For seven years now it has been selling steadily, making new friends the world over from Sydney to Singapore, Naples to Nebraska, Montreal to Melbourne, in fact anywhere where people know the meaning of the words 'sports car.' While the new 1600 Mk II is the fourth A-type model in this period, it has the same body as the first A, which was introduced in 1955. Thus the MGA has had a far longer life than any of its predecessors….”

The ensuing very British description of the driving characteristics of these cars captured the essence of what has inspired amazing loyalty to the MGA more than 50 years later: “This new MG is definitely a very fast car in the true sense of the word and we covered many miles with the speedometer needle flickering between 75-80-85 and 90 mph with the engine humming effortlessly away and giving absolutely no complaint. … the car is quite stable right up to its maximum of about 105 mph and digs itself reassuringly into the corners without marked understeer or oversteer.”

Underneath, the Mark II cars had gained a unibody platform versus the earlier body-on-frame design, which contributed to the far more solid feel compared to the earlier cars. Other innovations included the larger engine displacement (to 1622 cc), a small oil cooler behind the grille (the grille itself was also redesigned), while the front disc brakes from the Mk I model were retained, and the classic cockpit and gauge layout remained similarly carried forward. The example listed here does not have the original motor. The MGA Mk II would go on to develop a rich racing history. To this day, the model is considered the best overall MG produced.

The red MGA Mark II 1600 offered here is a beautifully restored example as the more than 150 high-definition photographs and accompanying video available on the GarageKeptMotors website amply demonstrate. The car is photographed from literally every possible angle—including underneath—and the attention to detail and execution of the restoration is obvious. The stance of the car is as perfect as when it left the factory. Body seams—an often telling marker for overall condition—are tight straight, and free of imperfections. The quality application of the red exterior paint—including inside the trunk and engine bay—is uniform, properly glossy, and free of errors. The car's engine bay is tidy and complete; the engine itself is properly sorted and displays original markings and data plates. All glass and lighting lenses are clear; chrome bumper and trim condition is exceptional. The chrome wire wheels (mounted with Michelin XZX radial tires) with spin-on hubs are the perfect touch for this vintage British sports car.

Inside, door trim and leather upholstery are rendered in tan leather complemented by black carpeting (with black MG-branded rubber mats) throughout. The beautiful, slightly burl-grained wood dash is the driver's focal point. It frames the proper Jaeger instrumentation and is the backdrop for the classic wire-four-spoke MG steering wheel. A walnut MG shift knob delivers gear-change commands to the four-speed synchromesh transmission. At the rear of the car, the “boot” reveals a Michelin XZX spare mounted on a chrome wire wheel matching the other four, with space available for a weekend-in-the-country-for-two amount of luggage.

The Mark II was the final iteration of the MGA, and it remains a desirable model among collectors today; this 1962 car is a perfect example of why that is so. A beautifully presented vehicle throughout, and built in the final year of MGA production, this is a collectible MGA with many more years of driving pleasure yet to come for its new enthusiast owner. Be sure to check out all the photos and video on our main website: Garage Kept Motors. Call if interested or e-mail with any questions. Thank you for looking.