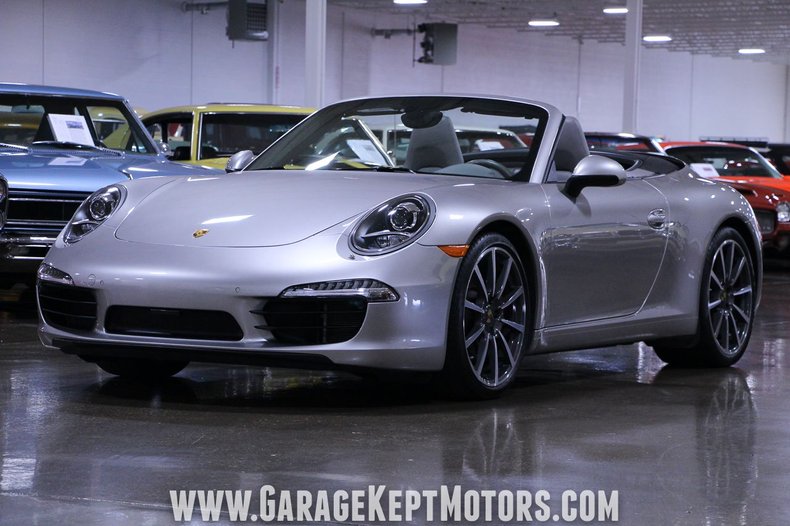 (Please note: If you happen to be viewing this 2012 Porsche Carrera S Cabriolet on a website other than our Garage Kept Motors site, it's possible that you've only seen some of our many photographs of this vehicle due to website limitations. To be sure you access all the more than 190 photographs, please go to our main website: GarageKeptMotors.)

“Reinventing the 911 for a new generation is a difficult and often thankless task, especially for those in love with the previous iteration. But when it comes to improving on the seemingly un-improvable, the engineers at Zuffenhausen have a 7-0 career record.”
-Douglas Kott, Road & Track, 12/29/11

The “7-0” mark Road & Track's Douglas Kott referred to in the magazine's review of the then-new 2012 Porsche 911 Carrera S relates to the seven generations of the famous marque. Indeed, the 911 was, and is, the longest-running model in the history of automobiles. And if you're a Porsche enthusiast, the beginning of each new generation—in this case, the seventh, or “991” generation—can be a logical focal point, with the specific new-generation cars often having added appeal and long-term collectability value.

So, how did the seventh generation Porsche 911 fare in the eyes of the automotive press back in late 2011?

Road & Track: “You could say this Porsche has made its competitors mad as hell... but if the brilliance of the new car is any indication, they'll have to continue taking it for decades to come.”

Wired magazine: “… (this) 911 is a stimulant, a drug. It wakes you up, smacks you around, and convinces you that you are the single most important person on the pavement.”

It's fair to say the 2012 911 Carrera S was a seventh-generation home run. While sharing the basic proportions of its predecessor (yet none of its component parts), the new 991 series was a true leap forward. And the proof is in the performance. Just consider the car's stunning numbers: circled the skidpad in Road & Track's testing at an impressive 0.99g; recorded a Nurburgring Nordschleife lap time of 7:40, a full 14 seconds quicker than its predecessor; delivered zero to 60 mph in just 3.5 seconds; and traveled the quarter-mile in 11.8 sec. Every one of these numbers represented equal or better performance versus the previous-generation-based 911 GT3 RS 4.0.

The 2012 911 Carrera S Cabriolet offered here is an exceptional example of Porsche's premier model in its open-air-motoring variant. The more than 190 photographs taken from virtually every angle and presented on our website, GarageKeptMotors dot com, speak to its near-perfect condition, a testament to the fastidiousness of the car's only owner since new. To that point, the included Carfax documents consistent Porsche-dealer maintenance and service (Note: Service providers, Delta Imports and Grand Rapids Porsche, are the same enterprise) over the car's life. And its 17,000 total miles—fewer than 2,500 per-year—further speaks to an owner who respected this fine automobile.

A truly stunning combination of a Platinum Silver exterior and 20-inch Porsche Classic wheels, with optional Platinum Gray leather interior beneath a black fabric convertible top, makes for a classic look. The car's original $108,000 base price grew by nearly $30,000 with options specified, notably including the PDK shiftable automatic transmission, dynamic chassis control, sport exhaust, sport chronograph package, Burmester® audio package and more. (Please see the window-sticker image in the photo gallery for the full list.) To use the term “bargain” when referring to an automobile of this caliber seems almost sacrilegious, but at a current price nearly 50% below its original sticker, the term is apt.

Wired magazine concluded its 2012 911 Carrera S review with this: “One piece of advice: If you have the means, pay it.”

We couldn't have put it better ourselves.