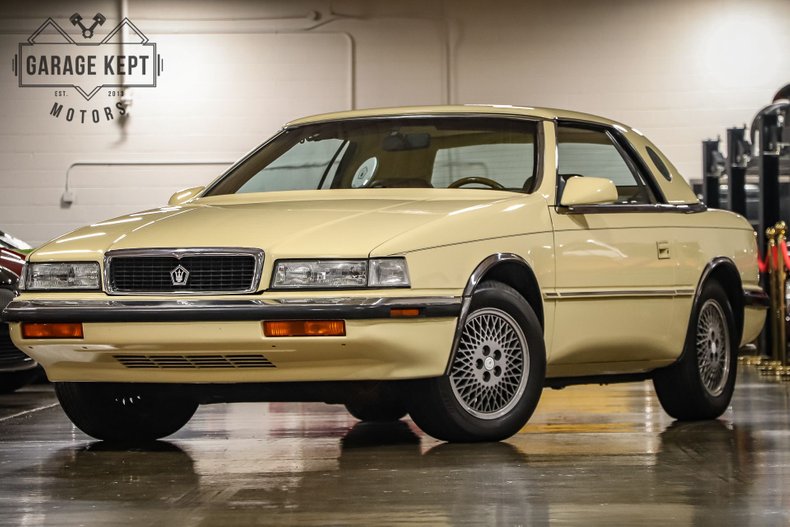 Garage Kept Motors is pleased to present a pristine, low-mileage 1990 Chrysler TC by Maserati for consideration. This car was purchased brand new by David Van Andel, son of Jay Van Andel, the co-founder of Amway Corporation and founder of Van Andel Institute. The Van Andel's also own Van Andel and Flikkema Motor Sales and in 2004, they sold the car to a local woman. According to records and the CarFax report, she always had the car serviced at the Chrysler dealership. The vehicle remains in amazing condition and being a limited production joint effort from Chrysler and Maserati, it has become rare and collectible. Only 7,300 units were produced between 1989 and 1991. Base price was $35,000 for 1990 models.

The car is finished in Light Yellow over a luxurious Tan Leather interior. It has a body matching Light Yellow removable hardtop and an interior matching Tan soft top. The car is powered by the original, low mileage 3.0L V6 mated to an automatic transmission with front-wheel drive. The most eye catching features include the Chrysler/Maserati badges throughout and the plush interior. Feels like you're sitting in a massage chair. Mint wood grain trim lines the cabin with power optioned everything. The AC blows ice cold and the music flows nicely through the original Infinity radio/tape deck. The car runs and drives like new. With less than 20k miles, it still looks like the day Mr. Van Andel drove it off the showroom floor. The car comes with all the books, manuals, and tool kit from new. It is a remarkable vehicle at a very reasonable price point. Be sure to read the Hagerty history below - “the best Maserati ever built…as well as the best Chrysler built.

Check out our website for over 100 photos and video. Call if interested or e-mail with any questions. Thank you for looking!

In 1987, Cadillac had its Allante, a semi-exotic flagship with bodies built in Italy by Pininfarina and shipped to the U.S. for assembly. In 1988, Buick had its Reatta, another two-seat semi-exotic flagship. Planning for Chrysler's own two-seat semi-exotic began in 1984, with the signing of a memorandum of understanding between Chrysler and Alejandro de Tomaso. The new TC was slated for introduction in 1987, but it took two additional years to hit the market. It debuted after the lower-tier and similarly styled LeBaron convertible, thus denting its flagship status from the start. Instead of the new look being passed from the top down, the public got the chance to buy a lower-priced car with a similar look first. This essentially doomed the TC before it even started. Still, the TC was a hand-crafted car, with some nice details, especially the leather upholstery. Pricing ran in the $30,000–$33,000 range when new, which was about what a standard Corvette cost and half the price of the Allante, though about $4,000 above the Reatta. Initially, the TC came with a 160-hp 2.2-liter turbocharged and intercooled four, with the option of a 200-horsepower “Maserati” variant with special 16-valve head and equipped with a German Getrag five-speed transaxle. By the 1990 model year, Chrysler had heard enough from buyers about turbo lag and the rough nature of the engines, and it offered up a Mitsubishi-supplied 3.0-liter single-overhead-camshaft V-6 as found in sedans and minivans. The V-6 replaced the standard four cylinder, and had a new four-speed automatic transaxle. The engine was as smooth but offered up only 141 horsepower. The 200-hp engine and five-speed continued as an option. Production ended in calendar year 1990, though a few 1991 model-year cars were produced. Approximately 7,300 units were built in total. The Chrysler TC car had plenty of substance, with technology befitting what the Brits refer to as a “bespoke” high-end vehicle. And it was truly international beyond its styling partnership: A Teves anti-lock braking system was employed, and struts and shocks were specially developed by Fichtel and Sachs. The alloy wheels were fabricated in Italy by Formula One supplier Fondmetal. Forged pistons for the 200-hp engine were supplied by Mahle of Germany, and Japanese firm IHI supplied the turbocharger. Aficionados consider these to be the best Maserati ever built — certainly less finicky than the high-strung V-6 and V-8-powered true exotics — as well as the best Chrysler ever built. In the current market, they are a hand-built bargain, though restoration candidates will put you underwater fast. Better to buy the best one and take care of it.