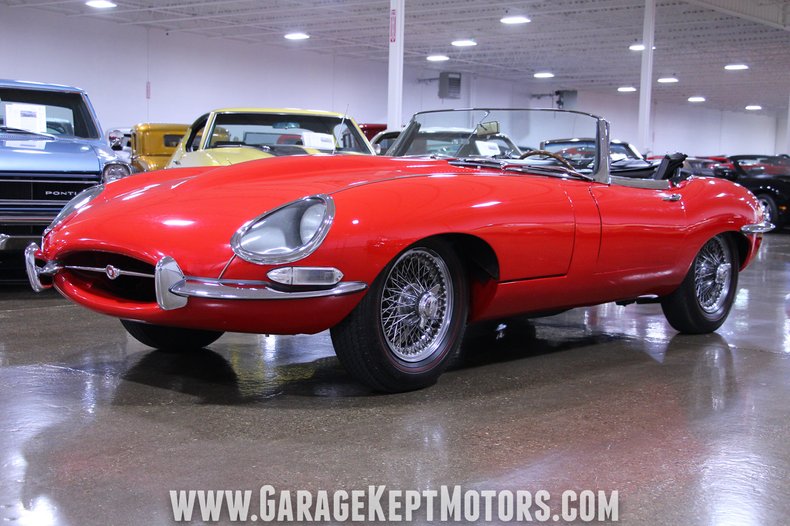 (Please note: If you happen to be viewing this 1963 Series 1 Jaguar XKE Roadster on a website other than our Garage Kept Motors site, it's possible that you've only seen some of our many photographs of this vehicle due to website limitations. To be sure you access all the more than 150 photographs, please go to our main website: GarageKeptMotors.)

In the memorable work of automotive journalism referenced above, Peter Egan captured the essence of the Series 1 Jaguar XKE. Reporting on his retrospective driving review of two Series 1 Jaguar XKEs--including the first of its type originally displayed at the April 1, 1961 New York Automobile Show launch—Egan waxed eloquent, as is his way. An admitted Jaguar aficionado, he fairly evaluated the XKE as the benchmark it is in the entire history of the automobile. (That he managed to pen his lengthy review without mentioning Enzo Ferrari's description of the model as “the most beautiful automobile ever” says something about Egan's penchant for original writing.) Here's more of his elegant prose in the 2016 Road & Track article (we'd encourage you to search out the full text of the original article online):

“It had a tail end like a wasp, with two chromed exhaust stingers sneaking up the underside; a steering wheel and in­struments out of a Mike Hawthorn rac­ing photo; wraparound bumpers that looked like half-retracted safety razors; delicate forged upper and lower A-arms that appeared incapable of holding the weight of the chassis, let alone the long, dense, XK engine with its polished cam covers and neat trio of 2-in. SU carbu­retors, which breathed through a back­ swept silver plenum atop an air cleaner the size of a Sears shop-vac. And then there were front torsion bars instead of springs, black-porcelained exhaust headers, wire wheels, knockoffs, glass-covered headlights. The car seemed to have a hundred individual parts you'd gladly display in a trophy case; it was a virtual mother lode of future paperweights, conversation pieces, heraldic wall hangings and Druidic totems, all compacted into a single kinetic object of amazing sensuality and grace.”

Egan's article, referencing the magazine's earlier tests of the model, also listed XKE performance statistics, many still considered excellent by today's standards: 150mph top speed; 0-60mph in 7.4 seconds; 0-100mph in 16.7 seconds; 265 horsepower and 260 lb.-ft. of torque from the 230.6 cubic-inch 6-cylinder engine and 4-speed transmission combination. He praised the driving experience: “And that legendary engine torque is real. The car pulls away from a stop effortlessly, accelerates with steady, re­lentless force and cruises at highway speed with the calm assurance of a Merlin V-12 at part throttle. Get on the gas at 70 mph and you can feel those six long-stroke pistons start picking 'em up and putting 'em down; the car zooms up to 90 with a low, steady growl and no particular drama. And what else would you expect? Sev­enty mph is less than half speed.”

Egan ended his piece with more praise: “The E-Type seems to have been created by people who loved what they were doing and wanted, almost child­ like, to show us what they could make. And what they made was the product of hard work, historical good fortune and pure inspiration from the deepest and most sincere yearnings of the human spirit. It's a graceful blend of craft and innocence whose like we may not see again.”

The Series 1 Jaguar XKE offered here is a magnificent example of this historic model. In every respect, the car has been lovingly treated, faithfully maintained, and in a nearly $50,000, 3-year regimen completed in 1994, restored to as close to perfection as is humanly possible. This no-expense-spared work was commissioned by the XKE's owner of over 30 years. In all, he lavished nearly $75,000 on the car. As an example, the restoration work included replacement of all engine bearings; new pistons, valves, stems, timing chain, clutch, transmission; new brakes including master cylinder; independent rear suspension completely overhauled; new heater motor, relay, control cables, defroster tubes, and fuel gauge; addition of electronic ignition, Kenlowe fan installed; seat belts added; electric system changed to negative ground. Since the restoration, the XKE has recorded just 6,500 of the 59,531 miles shown on the odometer.

In over 150 photographs of the car available on the GarageKeptMotors website, the condition and stunning beauty of this car are on full display. The standout red exterior paint with black leather upholstery is a classic combination. From every angle—including underneath—the car's remarkable quality is evident. The photographs alone are a delight. This is a true collector car in exceptional condition.

Peter Egan once more: “You have only to drive an E-Type, work on the engine or look at the car from any angle—inside, outside or un­derneath—to realize it has a quality and consistency of vision that goes all the way to its core.”