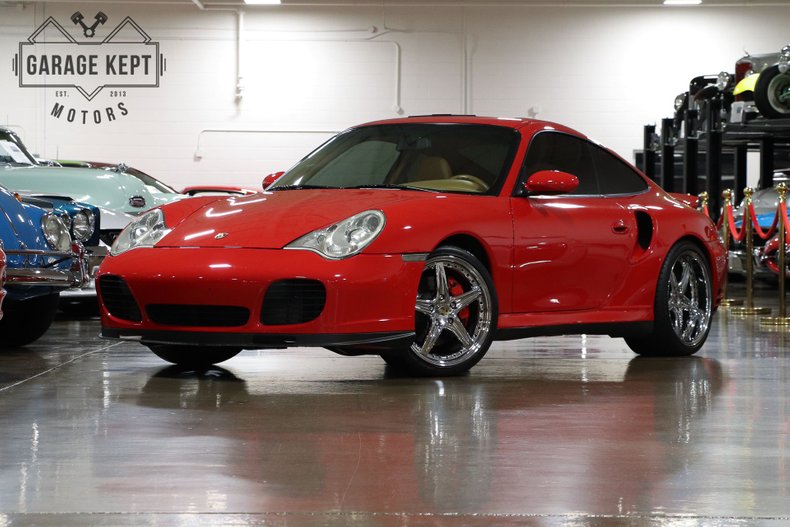 (Please note: If you happen to be viewing this 2001 Porsche 911 Turbo on a website other than our Garage Kept Motors site, it's possible that you've only seen some of our many photographs of this vehicle due to website limitations. To be sure you access all the more than 110 photographs, please go to our main website: GarageKeptMotors.)

“…a car that unravels the road like a video viewed on fast-forward….” –Phillip Bingham, Motor Trend First Drive, 5/2/00

The Porsche 911 Turbo, long an automotive legend, took a great leap forward in 2001 with its launch in the 996 series design. As the Motor Trend First Drive reviewer put it: “Many a driver of the previous generations of 911 Turbos has found himself on the wrong end of a tail-out cornering maneuver, as the heavy-rear-weight-biased Stuttgart sportster suddenly swapped ends in a decreasing-radius corner. The 996 Turbo brought all-wheel drive to the party, quelling many of those handling demons, despite packing 400 horses-making it the most powerful Porsche ever sold on our shores.” He praised the car's handling, adding “One surprise is that it's so easy to drive.” The Porsche Stability Management (PSM) system that “can recognize the moment you've driven the car to its limits, or beyond, and bring you back from the edge” added to that driving confidence.

This was a landmark 911 that was surprising on several accounts. As the first water-cooled turbocharged 911, the 2001 model marked this engine departure which has continued in subsequent turbo models to this day. The car's steering, which had long been twitchy, was suddenly, and surprisingly calm. The optional Tiptronic shift-able automatic transmission raised eyebrows at first, but soon became accepted as a very satisfying power-management system delivering a 0-60 time of 4.2 seconds. But perhaps the most shocking advance came from the absence of the turbo boost that plagued the earlier 930 cars. Again, the Motor Trend reviewer: “… the '01 911 Turbo gathers up speed with a fluid, seamless urgency: no rude surges when the turbos spool up, and no hesitation when engaging the next gear. The two equal-size intercooled KKK K64 turbochargers… are so well integrated, throttle responses so linear, and low-rev torque so generous that this really does feel like a larger-displacement, normally-aspirated engine.”

No discussion of 996 series Porsche 911s would be complete without some attention to the often-criticized exterior design of the cars. But the major “dings,” particularly on the 996 headlight styling, don't really apply to the turbo cars whose headlights were shaped differently and dipped into the bumper. The result of this seemingly small design change is far more satisfying than the non-turbo cars. What's more, the car's slightly longer, and more rounded nose features two large vent openings (to accommodate the car's third radiator) directly below the headlights. This combination further adjusts the car's forward-facing visual statement in an appealing way. In the rear of the car, cooling vents in the fender and the distinctive “slots” in the lower body, reminiscent of the legendary Porsche 959, make for a similarly unique statement.

Car & Driver's period review summed up the car this way: “The new, fifth-generation 911 Turbo is not only the fastest-ever street-legal 911, it's also the most refined.”

Unlike the more subdued colors like black or gray so often seen on these cars, the Guards red finish (quite rare for a 911 Turbo), makes no pretense of stealth on the example offered here. The historic Porsche color is striking, and the condition of the paint—as can be seen in many of the more than 110 photographs available on the GarageKeptMotors website—is exceptional. In similar fashion, the upgraded chrome wheels with colored “Porsche” crests display no rash or other damage. Their open-spoke design also enables excellent views of the red brake calipers and the large, drilled rotors. Headlight lenses are crystal-clear; windshield and other glass is similarly pristine.

Inside, the Savannah tan leather and matching trim displays no undue wear, and no sign of anything but exceptional owner care. One example: the “step-over” door-sill area is entirely free of careless scratches, with the characteristic script “turbo” nameplate showing perfectly. Steering wheel, dash and center console are virtually as-new. All gauges and warning lights illuminate clearly and properly.

This 911 Turbo spent the majority of its life in dry-climate Texas. At just over 40,000 miles—about 2,000 very low miles per-year—this modern-classic Porsche has many more thrills to deliver to its next owner. Be sure to check out all the photos and video on our main website: Garage Kept Motors. Call if interested or e-mail with any questions. Thank you for looking.