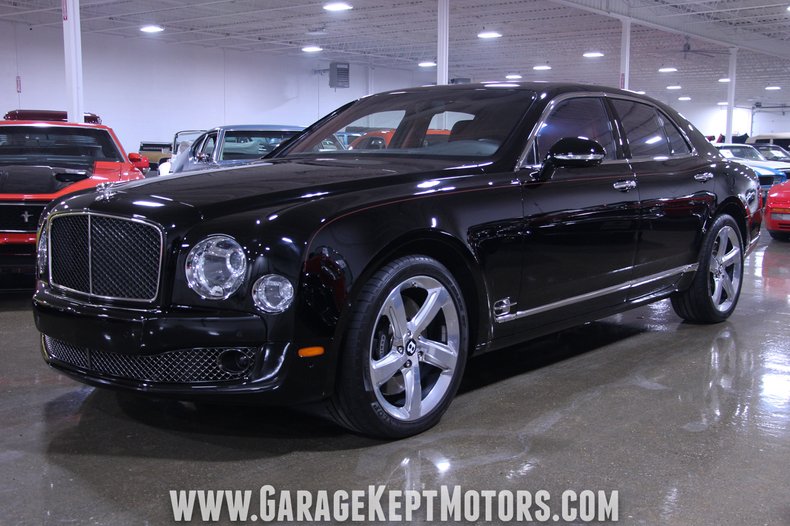 (Please note: If you happen to be viewing this Bentley Mulsanne Speed on a website other than our Garage Kept Motors site, it's possible that you've only seen some of our many photographs of this vehicle due to website limitations. To be sure you access all the more than 220 photographs, please go to our main website: GarageKeptMotors.)

“The Bentley Mulsanne Speed will allow its adaptive cruise control, a $3,895 option, to be set as high as 155 mph.” –Jeff Sabatini, Car and Driver

As difficult as it is to capture in a single sentence just how special an automobile a Bentley Mulsanne Speed is, the quote above does a pretty good job. And yes, you read it correctly: the car's cruise control alone cost roughly the same as a used '91 Honda EX wagon, and could be set to deliver a constant speed probably double what the old Honda would do. Is a Bentley Mulsanne Speed more car than most people can put to good use? Perhaps. But is it also a car that will deliver a fantasy-level, illegal-drug-like, OMG! automotive experience most people can only dream about? Without question.

Numbers do not do this car justice, but they do help tell a story. For starters, the “Speed” model came at a $31,900 premium over a standard Mulsanne. For the fiscally conscious, the window sticker (seen in the accompanying gallery) tells the full tale. Of course, it may be a bit gauche to dwell on option pricing for a car costing close to $400,000 originally. And even at that price, most original purchasers got no discount, probably fearing they'd appear gauche themselves, had they asked for one.

Then there are the power-related numbers. The Mulsanne Speed was propelled by a 16-valve, aluminum-block, 6.75-liter, twin-turbocharger V8 producing 530 horsepower. And torque? An astonishing 811 lb-ft. The car's 0-60 time of 4.8 seconds was fast by any standard, but remarkably so for a 6,000-pound vehicle.

One other smaller, but no less telling a number: 4. That's the number of seating positions, because… well, who wants to be crowded? And 4 also happens to be the number of “city umbrellas” suspended in the cargo area because, if you don't like being crowded, you're probably not too keen on getting drenched.

Noteworthy as all these numbers are, appreciating the Bentley Mulsanne Speed offered here is far more sensual than financial. Consider just a few of its manifest pleasures. Outside, the sculpted flying “B" hood ornament, bespoke grille, projection road lights, and tri-oval LED taillights unmistakably say “Bentley,” but do so without shouting. The understated “Beluga” exterior opens to reveal the “Hotspur” red hand-crafted, diamond-stitched leather interior, sure to generate appreciative “ahhhs” from fortunate passengers. And they'll have plenty more opportunities for that response: carbon-fiber finishes delight the eyes; massage-function rear seats delight the, um, derriere; a 20-speaker stereo delights the ears; powered window shades delight privacy-seekers; DVD screens that appear from the headliner and iPads included in the tray tables delight rear-seat passengers of any age; a 200-mph speedometer delights any would-be driver.

As to what this Bentley of Bentleys is like to drive, here's Automobile Magazine's Eric Weiner's description: “The thrust from the Speed's revised twin-turbo V-8 is simply monumental….” yet “…the Mulsanne Speed is never startling or disconcerting.” The car is “…so quiet and refined that it barely even feels as if it's touching the road.” And finally, “The Bentley Mulsanne is no sports car, but the firmer air suspension, heavier steering, and more animated eight-speed transmission in Sport mode are convincingly invigorating.”

The more than 220 photographs of this Bentley Mulsanne Speed presented on the GarageKeptMotors website are probably as close and detailed a view of this remarkable automobile as most people will ever get. No doubt many folks will peruse them again and again, simply to savor the car's beauty. But we're also confident there's one or more special individuals out there who will not only enjoy the photography, but appreciate the inherent value in owning this very low-mileage, pristine-condition offering at a price that really is a remarkable value. We look forward to hearing from them.