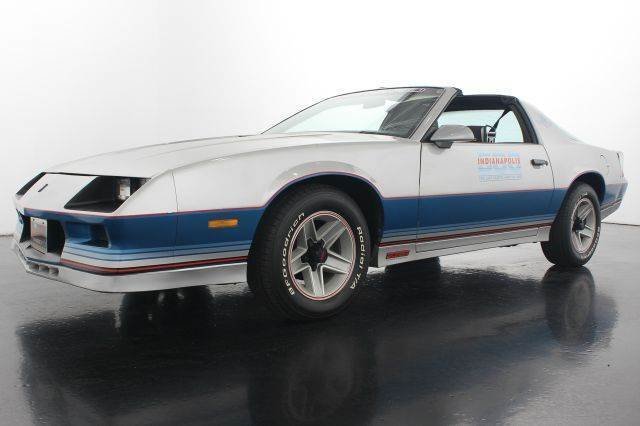 Currently for sale via eBay 10-day NO RESERVE auction, ending Sunday October 19, 2014. The newly redesigned Camaro for 1982 was one of the most aerodynamic cars of its time and was awarded Motor Trend magazine "Car of the Year" honors. It later would be chosen to pace the 66th running of the Indianapolis 500 on May 30, 1982. This historical Z28 has been garage kept and retains all the nostalgic elements from the pace car package, such as the T-Tops, red-trimmed aluminum wheels and the original Silver finish with special pace car graphics. It was originally purchased in Iowa and spent a majority of its life in Illinois before coming to Michigan in 2004.This low-mileage Indianapolis 500 Pace Car Edition is powered by the 305ci (5.0L) V8 and automatic transmission; however, the notoriously problematic stock cross-fire injection was removed to preserve engine longevity. It has been replaced by a new Edelbrock Manifold and Carburetor. The AC pump has been removed to retain performance and a Sony CD deck has also been installed. Other than those modifications, the car remains entirely original and all removed parts have been preserved with the car (see photo). Additional equipment includes power steering, power brakes, power locks, delay wipers, tilt steering, and rear defroster. The tires, brakes, plugs/wires, and distributor are all new. The odometer is true and reads 33,837 original miles. The car comes with original keys, owner's manual, T-Top bag, all original parts, a clean CarFax report, and even an un-opened Johnny Lightning replica. This is a collector car that you can enjoy in the present and will retain its value, if not appreciate down the road. The car drives well with great sound coming from the dual exhaust. You won't find many 3rd Generation Camaro Pace Car's with low miles like this one. A true time capsule. Don't let it slip away.