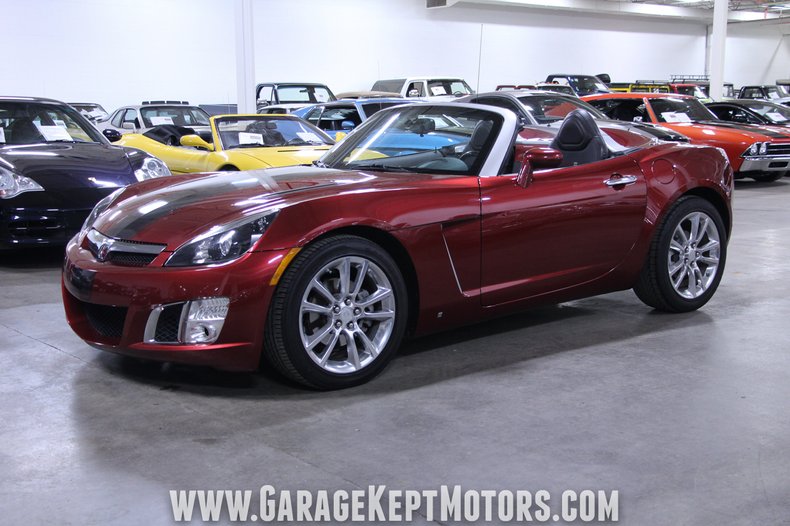 (Please note: If you happen to be viewing this Saturn Sky Redline on a website other than our main website, it's possible that only some of our many photographs of the car are shown due to website limitations. To be sure you see all the more than 130 high-definition photographs, please go to our main website: GarageKeptMotors.)

“Compared with whatever else you might be considering, there's a good chance the Sky is more fun.” -Kelly Blue Book Expert Review

Sometimes referred to as a mini-Corvette due to its similar engine bay layout and front-hinged clamshell-style hood, the Saturn Sky is well regarded for its unique mix of styling, power, comfortable cockpit, and satisfying road manners. For sports car aficionados, the Sky model to have is definitely the "Redline." As Car & Driver put it: “If you like the Sky but want more serious sports car performance, the Redline model significantly ups the ante.” And performance is the reason.

They continued: “(Redline)Horsepower jumps by almost 50 percent thanks to a sophisticated, direct-injection turbo 2.0-liter four. Suspension upgrades include Bilstein shocks and 18-inch alloy wheels.” Also included in the Redline model are a mechanical limited-slip differential, stability control, and a more aggressive chassis setup.

Another Car & Driver reviewer, Steve Siler, described the driving-experience advantage of the Redline: “Indeed, the new 2.0-liter four-cylinder engine, endowed as it is with a monstrous turbocharger, has 83 more horsepower and 94 lb-ft more torque than the 2.4-liter four-banger in the standard Sky, which does remarkable things for its character: not only is this car a dancer in the turns, but it's a sprinter in the straights. Saturn claims a 0-60 time of 5.5 seconds with a 13.9-second quarter mile at 100 mph. Believable? Sure. Fun? Oh yeah.”

Because the Sky shared General Motors' “Kappa” platform with the Pontiac Slostice, comparisons between the two models are inevitable. How to decide between the two? Well, several reviewers gave a definite edge to the Sky Redline on the basis of one critical observation: “It's even sexier.” (We also admit to liking the clever, yet understated “red line” badging on the car's tail.)

The 2009 Saturn Sky Redline automatic offered here—appropriately enough in Ruby red paint, exclusive to the Redline—is a terrific example of a car many believe to be a classic-in-the-making. From its handsome rear-deck twin-hump design, to the hood and side vents, to the brushed-aluminum a-pillar continuing across the width of the car, the Sky's “out-of-the-park” styling manages to be distinctive, yet restrained. Even the graphite-colored racing stripe nicely avoids showiness. The two-seater's interior includes air conditioning, power windows/locks/mirrors, six-speaker CD sound system, StabiliTrak stability control, AM/FM stereo with MP3-compatible CD, XM Satellite Radio, leather-wrapped steering wheel, power driver's-seat height adjustment, remote keyless entry and cruise control. Redline logo-embossing on the seatbacks is a nice touch. Be sure to study the more than 130 high-definition photographs on the GarageKeptMotors website, and enlarge them to see close-up details. You will be impressed.

The condition of the paint (be sure to look at the lower valances), 18-inch alloy wheels, black fabric top, interior switchgear (including the steering-wheel –mounted controls), piano-black and brushed-aluminum-look trim, and red-stitched leather upholstery (showing only minimal creasing) is exceptional. Similarly, underneath the clamshell hood (and behind the clear headlight lenses showing off the projector lighting), the Ecotec engine bay is tidy and unmodified, with the exception of an upgraded aftermarket downpipe. Underneath the car, there is no rust or corrosion evidence of winter-road use. As an original Georgia car, its later Michigan owner must've “garage kept” the car when the weather denied the pleasures of top-down driving. That the odometer shows under 7,000 miles-per-year, less than half of what's considered “normal” mileage-build, bears this out. Even the trunk displays minimal use.

With winter weather getting ready to abate, this Saturn Sky Redline may be just the ticket for the joys of open-air soon to be upon us. Whatever you're driving now, there's a good chance, as the Kelly Blue Book guy said, “the Sky is more fun.”