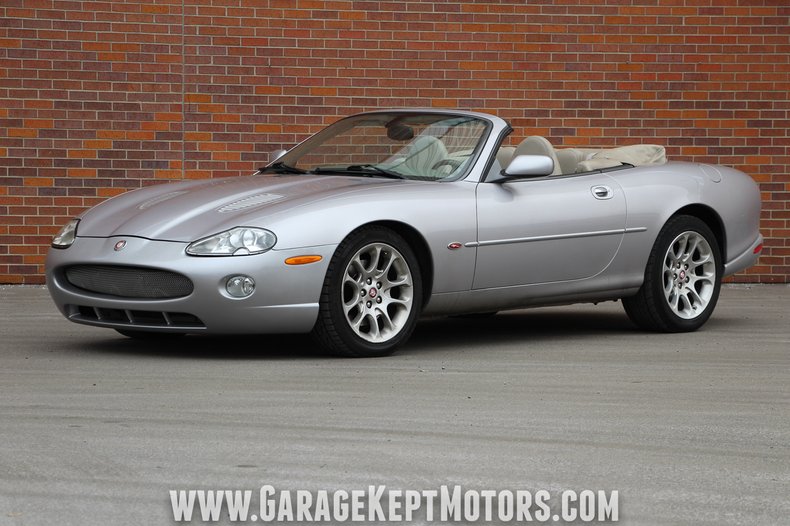 (Please note: If you happen to be viewing this Jaguar XKR on a website other than our main website, it's possible that only some of our many photographs of the car are shown due to website limitations. To be sure you see all the more than 125 high-definition photographs, please go to our main website: GarageKeptMotors.)

To say the least, Car and Driver's Mr. Huffman was quite taken with the then-new Jaguar XKR. He continued waxing eloquent, almost euphorically: “… just look at Jaguar's XKR. It's sex on wheels! A lot sexier than the naturally aspirated XK8 upon which it's based, and not sexy in a vulgar, lecherous, strip-club-near-the-airport sort of way, either. But Elizabeth Hurley-wearing- Versace-at-the-Oscars sexy: provocative, confident, not at all trashy, with an upper-class British accent.” Whew! (Sounds like he might need a shower.)

But when it came to the Jaguar's powerplant, he was no less enthusiastic: “Despite the spectacular looks, it's the engine's magnificence that defines the XKR's character. As in every other factory-supercharged automotive powerplant sold here, the device doing the work is a belt-driven Eaton Roots-style blower. In the 370-hp, 4.0-liter DOHC AJ V-8's case, it's the same 112-cubic-inch Eaton that Ford uses on its other supercharged V-8, the 360-hp, 5.4-liter SOHC V-8 found in the SVT F-150 Lightning pickup. On the Lightning's long-stroke, two-valve engine (which redlines at a mere 5250 rpm), the M112 supercharger spins at 2.1-times engine speed and peaks at eight pounds of boost. Atop the relatively short-stroke four-valve AJ V-8 (which spins to 6200 rpm before a fuel cutout turns off the fun), the blower turns at 1.9-times engine speed and huffs out 11.6 pounds. The relatively low supercharger drive ratio, says Jaguar, 'enhances the refinement and reliability of the supercharger installation.' That, and the fact that the blower nestles under its intercoolers, also means it runs more quietly compared with the same unit's operation in the Lightning.”

What about the hard-to-define thing called “character,” especially given the car's combination of British, American, German and Italian componentry? Again, Mr. Huffman: “… from the bottom of its Italian tires through the whirring of its American supercharger, and the silken shifts of its German (Mercedes-Benz) transmission, the Ford-financed XKR indicates just how character today is more an act of corporate will than where a car happens to be assembled. The greatest achievement of this fast, beautifully built, transnational sex machine is how completely it's a Jaguar.”

With fewer than 5,000 miles per-year on the odometer (a third of what's considered “normal”), this XKR has definitely seen limited use. Further evidence of this can be found in the photographs on the GarageKeptMotors website, especially the shots of the undercarriage, engine bay, and lower fascia (front, rear and both sides). Its ownership history in Wisconsin, Illinois, and Michigan, together with the pristine condition of the body and undercarriage suggests this Jaguar stayed inside in nasty weather, and never saw much, if any, snow. (Be sure to enlarge the high-definition photographs to see detail.) A further anecdotal tidbit on the care this XKR received: According to the Carfax record, its first owner had the car washed and detailed some 21 times!

Car & Driver wasn't the only expert reviewer to hail the XKR. Motor Trend heaped more praise on the car in a period review headlined “The 'R' Stands For Respect, Which Is Just What You'll Get.” And AutoBlog joined in with “The Jaguar XKR is one of those rare grand touring cars with seemingly endless talents.” But we doubt the next owner of this beautiful silver “cat” will spend much time reading reviews of the car. He or she will be too busy enjoying its many charms... out on the road.