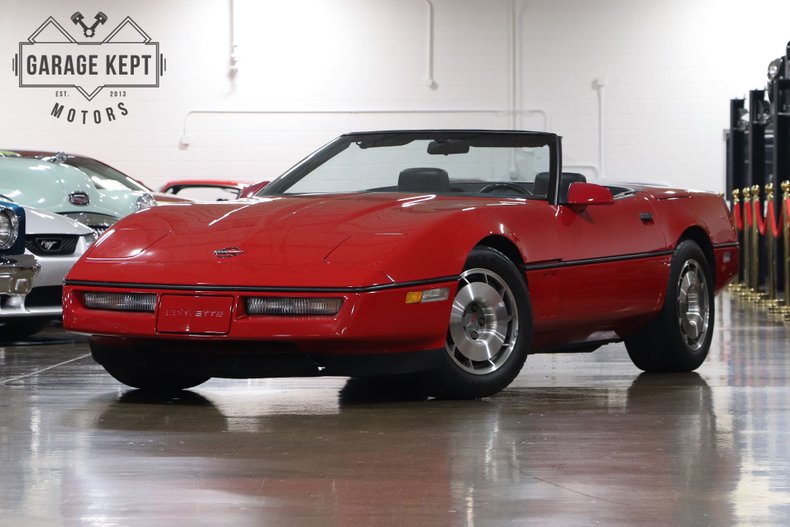 (Please note: If you happen to be viewing this Corvette on a website other than our main website, it's possible that only some of our many photographs of the car are shown due to website limitations. To be sure you access all the more than 90 photographs, please go to our main website: GarageKeptMotors.)

“Little red Corvette, baby, you're much too fast

The lyrics to Prince's 1982 song capture the timeless appeal of every “little red Corvette,” certainly including the C4 cars which were in the late stages of development when the song hit the charts. This fourth Corvette generation would endure for a dozen years, from 1984 through 1996.

The C4 Corvette represented a major development for Chevrolet and, over its long production run, featured many firsts for the legendary marque. Not least of these was the replacement of earlier Corvette body-on-frame construction with a steel “birdcage” uni-body, and a center spine connecting the engine to the differential and supporting the drive shaft. Body stiffness was improved dramatically. The new exterior body design incorporated a track-inspired clam-shell-style hood, hinged at the front, which exposed the entire engine for easy-access servicing. A horizontal rub strip bisected and surrounded the body and, in addition to giving the car a design signature for its wedge look, also concealed the seam where the two fiberglass body panels were joined.

While the eighties saw the government enforce mandates for automobile manufacturers to increase fuel economy and reduce exhaust emissions resulting in lower overall performance, the C4 Corvette was hardly weak-kneed in the power department. In 1985, the more efficient L98 350 cubic-inch (5.7 liter) TPI (Tuned Port Injection) engine rated at 230 horsepower came standard. On overall performance, Hemmings Motor News declared: “… the C4 was a world-class sports car, capable of 150 MPH and .95g on the skid pad, at a fraction of the cost of a Ferrari.”

As a well-maintained, one-owner example, the 1987 torch-red-over-black-leather Corvette convertible offered here captures its time period perfectly. Purchased new in Holland, Michigan (the original bill of sale comes with the car), with the exception of a short stint with the same owner in Washington state, the car has been a fair-weather Michigan car its entire life. At an average of just over 2,000 miles-per-year, it's been babied, but not stored on a shelf. The engine compartment is in order with no sign of add-ons or aftermarket modifications. (Be sure to watch--and listen to--the video of the car at GarageKeptMotors website to hear the smooth, throaty L98 engine output.) The car's exterior paint and its black-fabric convertible top are in outstanding condition. Corvette-only cast-alloy wheels and tires are in pristine condition. (Study the website photographs closely, and enlarge them to appraise this.) Carpeting, door panels, dashboard, automatic-transmission shifter, and steering wheel all display the care rendered by the long-term owner. Inside, the bespoke bucket seats created specifically for the C4 by Lear-Siegler show a patina of light wear, free of rips, tears, or discoloration. Their ample bolstering speaks to the car's nearly 1g skidpad performance. Switchgear is vintage 1980s including the fully functioning, colorful digital displays. The factory-installed Delco-Bose system—in its day, a new level entertainment system in a sportscar—operates as it should with ample volume for satisfying open-air driving music. Cassette-tape storage in the center console is a fun, vintage 80s touch.

“Red” and “Corvette” just go together. And from music to pop culture, the eighties were a time when “much too fast” was pretty much the way things were. If that decade was a coming-of-age time for you, this just may be a time-travel machine to transport you back to those good times. Just as it was for its only other owner, this Corvette may just be your "love that's gonna last."