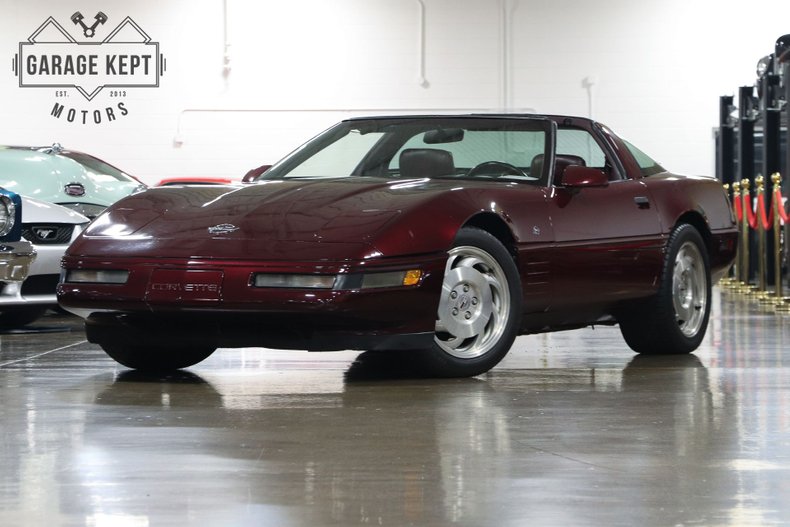 (Please note: If you happen to be viewing this Corvette on a website other than our main website, it's possible that only some of our many photographs of the car are shown due to website limitations. To be sure you access all the more than 80 photographs, please go to our main website: GarageKeptMotors.)

“… one of the fastest, best-handling cars in the world….”
John Davis, MotorWeek/1993, 6-Sports Car Comparison

Apparently, the development demands of the C4 Corvette were such that its debut couldn't happen until 1984, and so Chevrolet missed celebrating the 30thanniversary of the marque with the new model. There was no “anniversary edition” in 1983. The Corvette brain trust wouldn't make the same mistake ten years later.

The National Corvette Museum waxed eloquent about the 40thAnniversary cars: “With 40 years of heritage and refinement behind it, the 1993 Corvette is the classic American two-seater. Corvette's 5.7-liter LT1 V8 delivers 300-horsepower (and 340 pound-feet of torque @ 3600 rpm) to combine smooth in-city performance and ferocious capability at high RPM, with either the 4-speed automatic or the 6-speed manual. This is driving the way it is meant to be. Technology in the 1993 Corvette also includes sophisticated fully independent suspension with precision-crafted aluminum componentry, an all-disc-four-wheel anti-lock brake system, and a traction-control system that helps the car utilize all available traction by regulating wheel spin. Asymmetrical, unidirectional 17-inch Goodyear Eagle GS-C tires help deliver precise response to driver input.”

Presented here is a well cared-for 40th Anniversary Corvette 6-speed manual coupe, showing just under 85,000 total miles, or approximately 3,400 miles-per-year. The car has been with its current owner for ten years, and comes freshly serviced with an oil change and new water pump and oxygen sensor. The bespoke Ruby Red paint displays beautiful gloss—including on the removable top—as the more than 80 detailed photographs on the GarageKeptMotors website clearly show. Inside the matching Ruby Red leather upholstery is sumptuous with an appropriate patina of creasing, but no rips or tears. The red leather is complemented by deep red carpets, door panels, and black driver-focused dash and instrument cluster, all in near-perfect condition. The entertainment system, air conditioning, power-seat controls, lighting, and other switchgear all operate as they should. Under the clamshell, front-hinged hood, the LT1 engine compartment is clean and well kept. Be sure not to miss the video at our website to hear this legendary small-block engine at idle and revved.

Some special-edition cars are best stored, or hidden away in a collector's garage. But a rare few are meant for the enjoyment of the open road, attracting admiring stares and “I remember” glances from onlookers, best enjoyed from the driver's seat. This 40th Anniversary Corvette coupe is one of these; a very special driver's sports car.