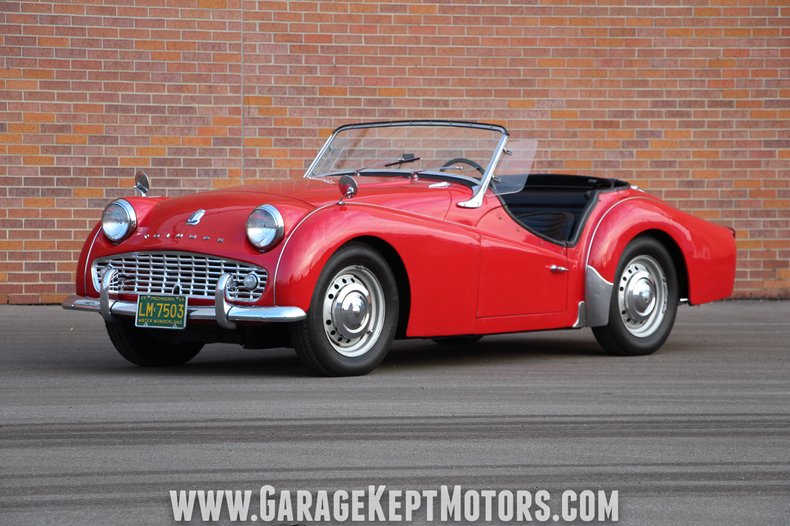 (Please note: If you happen to be viewing this Triumph TR3 on a website other than our main website, it's possible that only some of our many photographs of this car are presented due to website limitations. To be sure you are able to see all the more than 125 photographs, please go to our main website: Garage Kept Motors.)

“Seldom, if ever…  have we ever met a man who bought a TR2 or a TR3 and regretted the purchase.” –Len Griffing for Car and Driver, 1970

There are a number of excellent reasons why Mr. Griffing's quote is accurate. Triumph TR3s are simply very, very satisfying sports cars in the classic British tradition. The Car and Driver archived review went right down the line with praise beneath the headline "100 horses of fury."

The engine: “There is plenty of power, even around 2000 revs, but the engine likes to go over the 3000 mark.” The gearbox: “…the short gear shift lever is perhaps the nicest feature in this department: we changed gears by reaching out and taking hold of the rubber dust cover on the stick, and changed gear slots by moving just the thumb. It's as easy as that.” Performance: “Acceleration can be neck snapping if you want it to be….” Stopping power: “The brakes leave absolutely nothing to be desired.” With characteristic English, to-the-point brevity, another publication, Britain's Motor Sport magazine, described the TR3 simply: “Commendably High Performance and Excellent Brakes.”

The red-over-black TR3 offered here has been collector-owned and exclusively adult-driven for the past16 years. It comes accompanied by a British Motor Industry Heritage Trust certificate showing a certified copy of factory records for the North- American-spec vehicle. Built in Coventry, England, the car still wears its original “Type 20/TR3” chassis tag with identifying number (TS52659L) matching the factory record. “Factory fitted equipment” originally included a heater, whitewall tires, a tonneau cover, “occasional rear seat,” tool kit and “spare wheel” (with, one assumes, a tire mounted thereon). It was built on May 26, 1959, and “despatched” shortly thereafter on June 4th, bound for European Motors in Detroit. From other available records, the car appears to have spent many of its early years in Canada, coming back to the states several years later.

Originally a gray-over-red leather example, a complete restoration occurred in the late 80's and early 90's including an engine rebuild as well as the color change inside and out. Sheet metal replacement took place for the lower portion of the door sills at the same time. In preparation for its sale, the car just received a complete tune-up by a Holland, Michigan shop nationally known for its expertise in British sports cars.

Short of an in-person inspection (which would be welcome), the best indication of this TR3's condition can be found in the over 125 photographs of the car on the Garage Kept Motors website. In particular, numerous close-ups are included so as to capture the car's solid, well cared-for condition. Its engine compartment and undercarriage are tidy. Condition of the upholstery, dash, gauges, and other interior appointments is uniformly excellent. Wheels and tires are pristine. Also included with the sale are the car's top, side curtains, and rear window canvas, as well as technical manuals.

Meant to be driven, and not put away on a shelf, this TR3 has many twisty roads and autumn drives ahead of it. And more smiles than can be counted await its new owner.