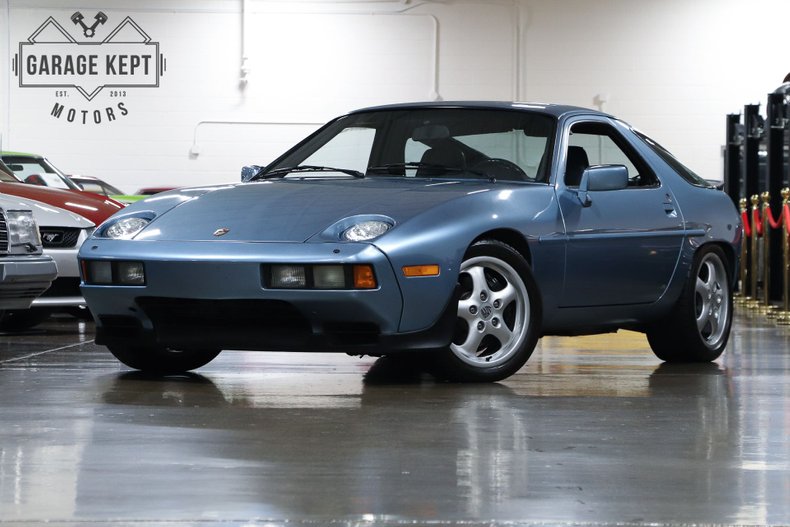 “Faster is better.” Csaba Csere reviewing the 1985 Porsche 928S for Car and Driver

(Please note: If you happen to be viewing this Porsche on a website other than our main website, it's possible that only some of our many photographs of this car are presented due to website limitations. To be sure you access all the more than 130 photographs, please go to our main website: Garage Kept Motors.)

These days, there really is no such thing as a Porsche that isn't considered collectible. And as every Porsche enthusiast knows, for every Porsche model, there is a ranking of sorts. The specifics of the rankings can be debated, but a hierarchy definitely exists. Some years, for example, are vastly preferred over others for a given Porsche. And the presence of letter descriptions (S, CS, GTS and so forth) after the numerical model identifier generally indicates a more cherished collectible. In the same way, rarity of color—with “paint-to-sample” or exclusive colors being the rarest of all—is yet another factor driving value. The 928S offered here checks these important boxes and more. And of equal consequence, it's a very well cared-for example of the five-liter V8 transaxle cars, the second-generation of the luxury Porsche grand tourer.

Some historical information on this 928: First off, as verified by its CarFax and its VIN tag, this car was manufactured in December 1985, and delivered new in Quebec, Canada late in 1986. The “C36” code on the option/VIN sticker also designates a Canadian-market car. (While no other option codes appear on that sticker, this is not uncommon on non-U.S.-market cars.) The car's engine and transmission numbers also appear on the sticker. The blue leather interior was designated by the “VK” code. And as to the beautiful light-blue metallic exterior paint (the CarFax also verifies “blue” as the color on the car at delivery), the “L999” code on the sticker indicates a non-standard color. This means it could be paint-to-sample, or more likely, a color not offered to the general market on a 928 in 1986, but still available on order. (Our resident Porsche historian tells us it's possible this color is ”Iris Blue,” but there is some debate on this because Porsche has given that designation to more than one color blue.) The car was repainted in its original color (visible in photographs of the metal surfaces surrounding the VIN sticker) by a prior owner. It remained in Canada until 2001 when it was imported to the United States. It has been with its current owner for thirteen years.

For 1986 (actually, 1986.5) the Porsche 928S represented a substantial improvement over its predecessor originally launched in 1977. The big news—and why this model is so appealing to collectors—was its new 5-liter, 32-valve V8 delivering 288 horsepower, a greater than 25% bump. Top speed for the automatic-transmission cars went up to 152 mph, with below-six-second 0-60 times, hence Czaba Csere's headline above. Retained were the car's “sharknose” styling and pop-up headlights, 3-door coupe layout, and exotic profile. “S” additions included integrated spoilers front and rear, and ABS braking.

One of the best indications of the overall condition of this 928S can be found in the more than 130 photographs of every aspect of the car, inside and out, top and bottom. From the uniformity of the exterior paint to the remarkable condition of the blue-leather seating, this is a very appealing example. The addition of the Porsche “cup” wheels is one more plus. Another indication of condition can be found in the details of the car's recent maintenance and the related documentation. More than $5,000 in parts receipts over the past few years is only part of the story. The car received a top-end rebuild (over $12,000 invested) with all hoses and gas lines replaced and intakes powder-coated. Brake rotors and pads were replaced (with stainless steel brake lines added) and the exhaust system was replaced. All this work, and more, was performed by the owner's son, a mechanic at a very high-end local shop. Timing belt and water pump were done in 2007. Only 3,000 miles have been driven since. Mechanically, the car is completely dialed in. Mileage-build of just 2,500 miles per-year speaks to owner care across all the car's 32 years.

Knowledgeable Porsche 928 shoppers know both the appeal of these legendary sports cars, and the fast-appreciating value inherent in a well cared-for example. Add in this particularly appealing color combination, and, well, “appealing” is an understatement. Be sure to check out all the photos and video on our main website: Garage Kept Motors. Call if interested or e-mail with any questions. Thank you for looking.