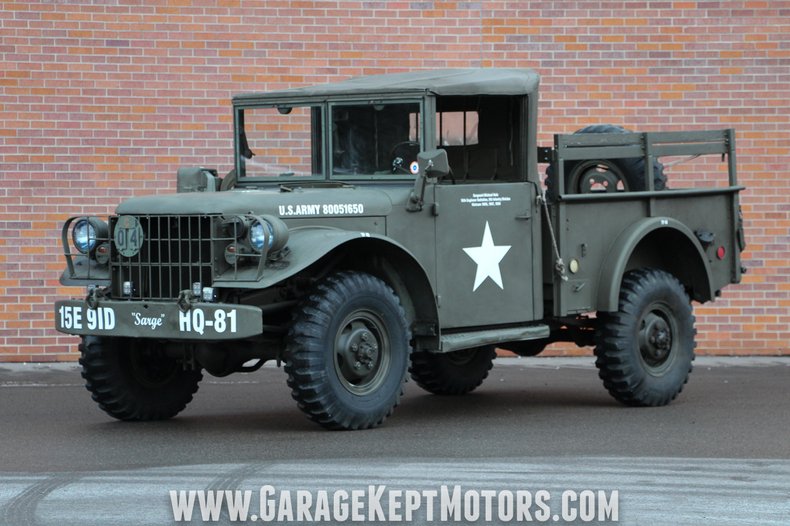 (Please note: If you happen to be viewing this vehicle on a website other than our main website, it's possible that only some of our many photographs of this car are presented due to website limitations. To be sure you access all the more than 150 photographs, please go to our main website: Garage Kept Motors.)

“This is one old warrior that isn't going to fade away.” Classic Car column, Globe & Mail

The M37 Army cargo truck was developed from the same platform as the Dodge WC trucks that saw duty during World War II. From 1951 to 1968, 115,838 of these M37 ¾-ton trucks (in several body-style variations) were produced by Dodge for the government. Military history buffs will note that this time period spanned the Korean and Vietnam wars in which these trucks saw extensive combat service. While the M37 remained in active service with the Army well into the 1970s, it was ultimately replaced by the M715 ton-and-a-quarter cargo truck based on the civilian Jeep pickup of that time. To many military-vehicle collectors and fans, the M37—along with the WWII Jeep and M35-series deuce-and-a-half trucks--represents the last of the classic-look Army vehicles. As a result, the larger-than-the-Jeep, but smaller-and-more-maneuverable-than-the-2 ½-ton M37 is arguably one of the most collectible military vehicles around. Fortunately, replacement parts remain plentiful.

The Army's use of vehicles has always put a premium on toughness and reliability. So, unlike today's SUVs and Jeeps, comfort and convenience features are nearly non-existent in true military trucks. The military's only “sound system” would've been a tactical radio in the back, and the only “automatic” might've been a Browning machinegun mounted above the roof. Off-roading” wasn't an Army pastime, it was a life-or-death matter, and the M37 was built to win those battles. Sadly, these vehicles often ended their lives in military scrap yards, or sent off to continue serving with some allied country's forces. Finding an M37 that hasn't been allowed to rust to death, been converted into a fire truck, or been modified in a way that destroyed its integrity can be quite a challenge.

The M37 offered here is an exceptional example of this military icon. Its only modifications are related to road-safety in the form of improved lighting, electronic horn, and wig-wag flashers. All its military-grade canvas—top, cargo cover, and seats—is in place and in excellent condition. Paint overall is in similarly excellent condition as the photographs demonstrate. The truck has been lovingly cared for by its current owner—a Vietnam veteran (he added his old unit's bumper markings)—for many years. It has not been operated in the winter, and instead was stored in a heated building. When the truck was refreshed, the original data plates were replaced with reproductions, but those original plates were kept and are included with the vehicle. In the same way, the appropriate (and very useful) Army technical manuals for the truck are included. Only a responsible collector takes such care.

Perfectly suited to parade and military historical-reenactment use, this M37 is still ready and able to serve... and inspire. After all, that's what veterans do.