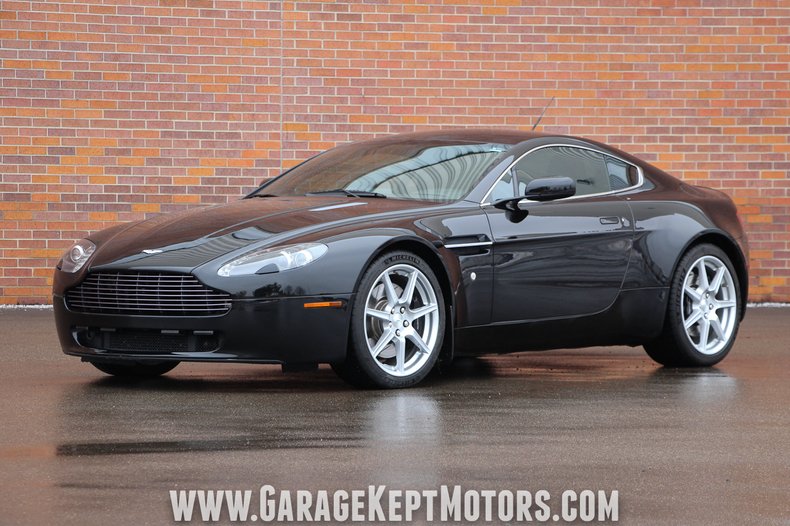 “…the Aston Martin (Vantage coupe) is a classic beauty, with enough creases and character detailing to keep it current.” – Car and Driver

Whether it's the storied handmade manufacturing history, the very British definition of luxury and performance, the multiple wins at LeMans, or even the cinematic association with James Bond, there's no denying Aston Martin automobiles hold a special appeal for enthusiasts in search of an out-of-the-ordinary ownership experience. The rarity of the marque—such that just catching sight of an Aston Martin on the street is an event in itself—only adds to the strength of the brand's appeal. The term “classic beauty” used by Car and Driver to describe the Vantage is no exaggeration.

The 2007 Vantage V8 Coupe offered here is an exceptional example of the Aston Martin breed. Most important, this Vantage was carefully optioned and lovingly cared for by its original owner. At just under 19,000 miles in all, it's easy to see that care evident in everything from the pristine engine compartment to virtually wear-free surfaces throughout the Obsidian-black-leather and piano-black-veneer enhancements throughout the cabin. Other luxury touches include the optional Aston Martin premium audio system with Bluetooth, heated power front seats, and satellite navigation. Perhaps most striking of all, the exterior sheet metal in Onyx- black paint shows the fluid, sensuous lines of the car—from the bespoke grille to the sloping rear GT roof—to their very best. Even the brake calipers were ordered in optional black, and they show nicely behind the also-optional seven-spoke alloy wheels. Rendered overall in the classic color of the night, this is simply a beautiful and rare automobile that will be admired everywhere it goes.

From a performance standpoint, the Vantage begins with a fuel-injected 4.3-liter V8 producing 380 horsepower and 302 pound-feet of torque stock. 420hp and 348lb-ft with upgrades. It also produces what one reviewer called “an irresistible V-8 growl.” This car further benefits from a dealer-installed Power Upgrade package and Quicksilver sport exhaust. The engine's output travels through a driver's-choice 6-speed manual transmission to yield a 0-60 mph time of just 5.1 seconds. As to handling, Car and Driver noted a surprise: “(Compared to the Porsche 911S) …our test crew preferred the Aston's handling, and also found it more entertaining to drive.” The Vantage, however, is no bone-jarring execution of a sports car. It is a true luxury sports grand-tourer that rewards a driver with a highly satisfying blend of on-road performance, executive-level comfort, and Aston Martin style.

The car comes with documented service records from new, as well as a hard-wired Passport SRX radar detector.

The fortunate next owner of this Aston will be someone who expects the very best, and expects it in an automobile that makes a strong visual statement. There is nothing here that will disappoint.