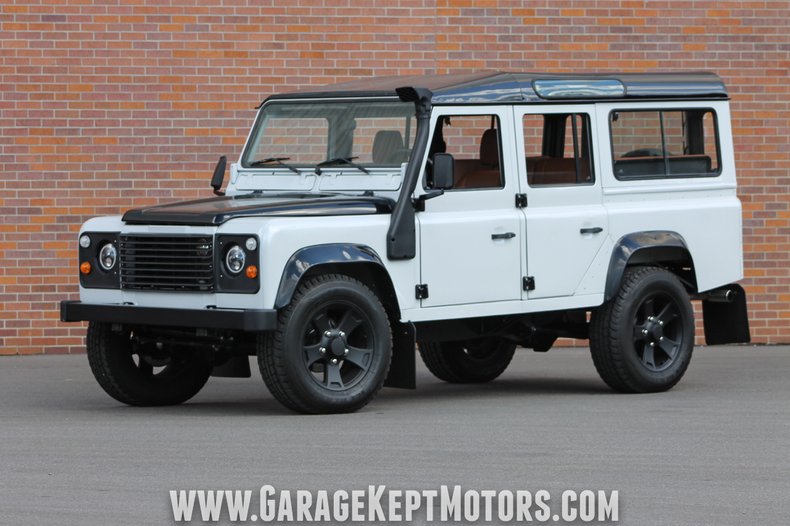 At its U.S. launch in 1992, Autoweek magazine called the LR 110 the British brand's “Defender of the Faith,” proclaiming: “This is the last and best chance of getting the original Land Rover over here….” But if you're a classic Land Rover aficionado (or zombie-apocalypse prepper), your real“last best chance” may have just arrived here at Garage Kept Motors, in this pearl-white-and-black over camel-tan-and black Defender 110 Station Wagon example.

This awesome Land Rover Defender 110 was rebuilt from the ground up two years ago by a degree qualified automotive engineer with over $100k invested. Less than 2k miles since rebuilt with a fully restored chassis. The truck is finished in Fuji White with contrasting Santorini Black roof, mirrors & wheel arch extensions. The 110 (the number denotes its 110-inch wheelbase) is powered by a 2.5-liter 200Tdi turbo-diesel inline-four sending power to all four wheels through an LT77S 5-speed manual gearbox and an LT230T 2-speed transfer case with locking center differential. Other features include Navigation add-on module, high end component speakers with remote cross overs fitted in all doors & dash, rear camera, fully fitted carpet set including custom tailoring to pillars, full customer leather trimmed seats, leather covered dash board and door cards including rear door, leather steering wheel, new door rubber seals, heater duct modification for better heat at feet area. On the exterior, upgrades include new Bespoke 18” alloy wheels and tires, new front bumper and LED spot lights, LED work light, LED front headlights, LED rear lights, full mud guard kit, body splash guards in black, exhaust with single silencer, modern single piece windscreen wipers. No expense spared and clean all the way around. Perhaps the best way to gauge history and prior treatment is to get on your hands and knees and inspect the underside. And we can save you the bending-over! Included in the more than 135 photographs available on our master website are almost 30 shots of this Defender's undercarriage and suspension. Not only are there no signs of aggressive offroad use, the overall pristine condition rivals many well-preserved passenger cars.

While über-capable offroad, as evidenced by a claimed 45-degree slope-climbing capability, the vehicle was surprisingly accommodating on paved roads. As Autoweek put it: “If you think this means the Defender is ill-at-ease on the highway, you're wrong.” Going on to add, “Though the front and rear axles are live, coil springs at each corner and a Boge Hydromat self-activating load leveler… handle streets and highways with nearly the same aplomb as they do ruts and rocks.” On top of all that, the snorkel on this Land Rover definitely adds a zombie-escaping capability few vehicles could match.

Considered the “last of the true Land Rovers,” at 25 years of age, this vehicle is a legitimate classic, and demand remains strong. Please get in touch by phone or email if you're interested. Don't wait for the inevitable first zombie sighting!