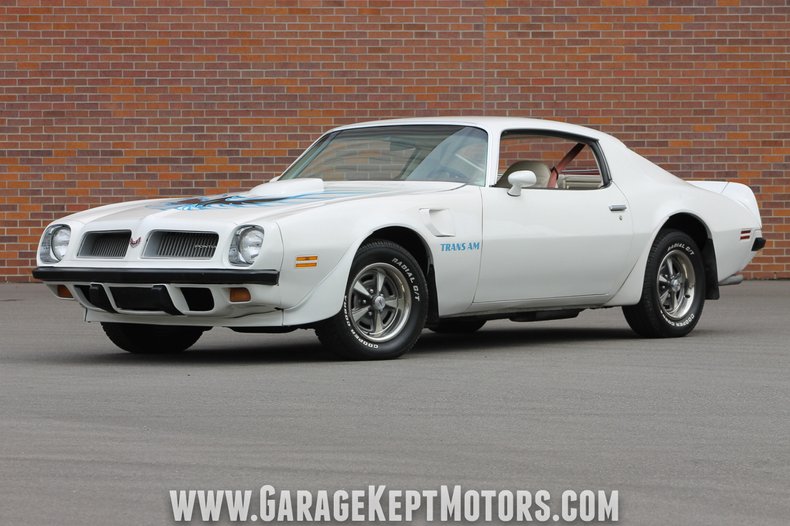 There are a number of high-performance muscle cars of the late 60s and early 70s that stand out as icons of an exuberant time before the energy crisis and government regulations delivered a one-two death-blow to that era. From its front-fender vents and unmistakable firebird emblem on the shaker hood, to the aerodynamic turned-up rear-deck spoiler (the view most drivers of lesser cars saw), the Pontiac Firebird TransAm is unquestionably one of the iconic marques of those times. Without the TransAm, the seventies would simply not have been the same.

The 1974 TransAm offered here is a standout example of the breed. Its bright-white-with-blue-decals exterior combination is less common than the black on so many of these cars, yet it harkens back to the first TransAm model from 1969, a car that was only available in white-and-blue livery. Newer Cooper Cobra radial tires and the original 5-spoke Pontiac-branded wheels are in place. The original, numbers matching 455 cubic-inch engine—its block displaying the turquoise blue hue Pontiac used at the time—has been professionally rebuilt by NAPA. While giving up some horsepower to the street-racer-oriented  “SD” version of the same engine, this straight 455 features interior tolerances less likely to require frequent tuning and special care. What's more, “SD” models can all too frequently suffer from speed-obsessed past owners who pushed the cars to their extremes. The very tidy condition of the engine bay and undercarriage here fit a car that spent a good deal of time in the southwest after its manufacture in the Norwood, Ohio plant. For the past 13 years, this TransAm has been in the hands of its current owner. Original manuals and extensive maintenance documentation will come with the car.

Inside, the red-and white upholstery and carpet combination on the car is exceptionally rare, a perfect “1970s style statement.” Red lap and shoulder belts are similarly uncommon. White-clad door panels are in superb shape. The turned-aluminum dash trim, a TransAm trademark, shows nicely. The driver-focused dash instruments include a 5,500-rpm tachometer with a smaller clock, and a 160-mph speedometer. This car also features air conditioning and a center-console-shifted automatic transmission. A Pontiac-branded AM-FM push-button radio is installed. The car's trunk compartment is as well kept as everything else, in keeping with the 88,183 displayed mileage (or roughly 2,000 very low miles per year.)

Even those not shopping this car in earnest will want to view the more than 150 photographs of this '74 TransAm, and watch—and listen—to the video available on the main website: Garage Kept Motors. There's just something about the rumble of that big V8 emanating from the twin exhausts.

This vintage Pontiac TransAm will not only briskly transport its new owner to car shows, muscle-car drives, and weekend enthusiast get-togethers, it'll also transport even the casual onlooker right back to the seventies.