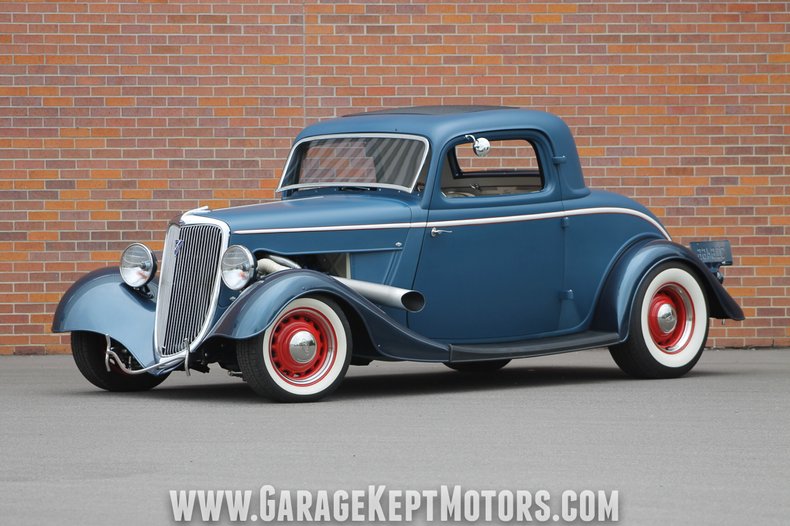 Garage Kept Motors is honored to bring to market one of the coolest and unique builds we've ever had the privilege to sell. This is an awesome 1934 Ford 3-Window Coupe that was commissioned by Ford Motor Company and completed by EMI for the 2009 SEMA Show in Vegas. EMI is credited for designing the Tesla all aluminum bodies and the new aluminum alloy 2015-current Ford F150 bodies. They are the leader in body design for the large auto manufactures and set the standard.

2009 marked the 75th Anniversary of the 1934 Ford Coupe and Ford wanted to celebrate that milestone. This was the car they did it with and it ended up winning Best in Show for SEMA 2009. What makes it even more special is the first application of a rear-wheel drive set up powered by the 3.5L Twin Turbo Ecoboost V6 engine, the same motor thats in the Ford GT. With over $350,000 invested, this is an absolute steal for the price offered here, considering its a one-of-one build with SEMA Best in Show accolades. Below you can read what popular car news publications had to say about it, but also be sure to check out all the photos and video on our main website: Garage Kept Motors. Call if interested or e-mail with any questions. Thank you for looking.

“Aiming to disprove the old saw that there's no replacement for displacement, Ford has dropped its twin-turbocharged and direct-injected 3.5-liter EcoBoost V-6 into a SEMA-bound 1934 Ford three-window coupe. With the help of Detroit Street Rods and Experi-metal, the EcoBoost was reconfigured for rear-wheel-drive, mated to a five-speed manual Tremec transmission, and fitted into the replica '34 body. Ford says this six is squeezing out an estimated 400 hp and 400 lb-ft of torque.” - Car and Driver

“The entire project took about a year from start to finish, and offers one of the most comfortable and stylish interiors you'll ever find in a hot rod. Maybe that's why it won Best In Show for SEMA 2009.” - Motor Trend

“Adapting this sophisticated engine to street rod use while making all that magnificent high-tech gadgetry work correctly can't be easy. Further complicating matters: While longitudinal applications are currently in the works, thus far the EcoBoost has been used only in transverse front-drive, east/west applications. The engine would have to be rotated 90 degrees and repackaged in a north/south configuration to fit in the '34 chassis. That tricky task was ably covered by Technosports Inc. of Livonia, Michigan, another Detroit-area firm that specializes in prototype and development work for the automakers and the motorsports industry as well. Technosports relocated the turbos and charge coolers, fabricated new intake and exhaust systems, made accommodations for the Vintage Air A/C system, and hooked the whole thing up to a Tremec TKO five-speed manual gearbox. Final tuning and calibration were performed at Ford Powertrain, the mother ship, where the combination made 400 hp and 400 lb-ft on the dyno. Bob Smith of Detroit Street Rods served as manager for the overall build with head wrench Rick Rzepka leading the assembly work, which was performed at EMI's own fabrication shop. Naturally, all the sheetmetal is brand-new stuff from EMI and Steve's Auto Restorations, including the fenders and running boards, though the hood is a Rootlieb part. The exterior theme uses as many original-style Ford trim pieces as possible to accentuate the body's authenticity-the taillamps, headlamps, and other barbs and baubles are all '34 reproductions. The chassis is by the Roadster Shop using independent wishbones and rack-and-pinion steering in front and a coilover four-link in the rear with a 3.90-geared 9-inch axle from John's Industries. The paint was laid on by Kustom Creations in Sterling Heights. Kustom, which uses Sherwin-Williams and Planet Color materials exclusively, shot matte clear over the medium blue on the cab to create a primered look, while the darker blue metallic on the fenders is actually a standard Ford truck color code. As with many unique paint schemes, the result is somewhat polarizing. People tend to love it or hate it-like the choice of a V-6 for a street rod rather than the more conventional V-8. But you have to admit the EcoBoost looks pretty good in front of a white firewall. And with those big dual megaphones, it sounds pretty good, too.”- Hot Rod Magazine