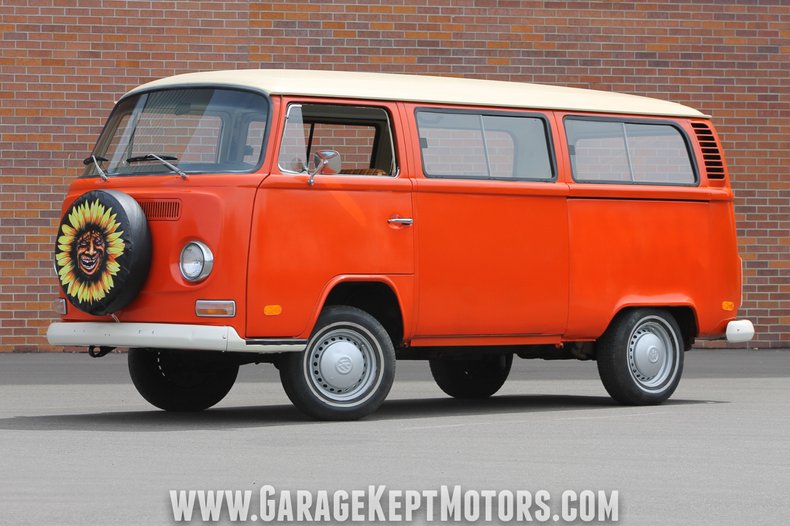 “Of course, every VW bus has stories! Some of them might even be printable.”
-Anonymous

Without the venerable VW bus, would the Sixties and Seventies have been the same? After all, what other vehicle had hippies, surfers, and beach bums all choosing it as their favorite? What other vehicle transported legions of young owners crisscrossing Europe and the United States? How many nights of joy (with and without accompanying illegal substances) were lived in one of these? Would “psychedelic” have the same meaning today without this iconic automotive image? All these unanswerable questions aim to get at one notion: the undeniable, ageless appeal of the VW bus.

The 1972 VW Type 2 Bus offered here must have its own stories: The image hand-painted on its front-mounted spare-tire carrier cover would probably be one. Regardless, it's definitely a roadworthy example of a classic, and it's ready to add plenty more miles, and as many stories as you're capable of starring in. Owned and looked after for more than 20 years by a gentleman now in his eighties, this VW Bus is very sound. Showing a believed-accurate 79,000 miles on the odometer, its orange-body-under-cream-top driver-quality re-paint is still serviceable, body panels are dent-free and straight, thin-stripe whitewall tires have good life left in them, and the tidy interior all indicate its prior custodians took good care of it. (Whether to change its color or continue as-is will be a fun decision for the new owner.) Undercarriage is also well kept with no signs of rust.

Built in Germany (as apposed to Mexico, Argentina, or Brazil where they were also sourced) in September of 1971, this would be one of the final models called a “Low Light” by VW aficionados, a reference to the front turn-signal lights positioned low on the face of the vehicle. On later “High Light” models, the lights were mounted up near the windshield. Other notable features of this generation bus are the sculpted larger air intakes in the d-pillar, the front-entry step molded into the bumper extension, a folding/extending side step below the sliding side door, an upgraded 12-volt electrical system, much-improved trans-axle rear suspension, 1.6-liter rear-mounted engine, and the introduction of front disc brakes.

There are still vehicles available that can completely change the way you look at life, vehicles that speak to you and prompt you to create your own stories, printable and otherwise. This is one such bus.