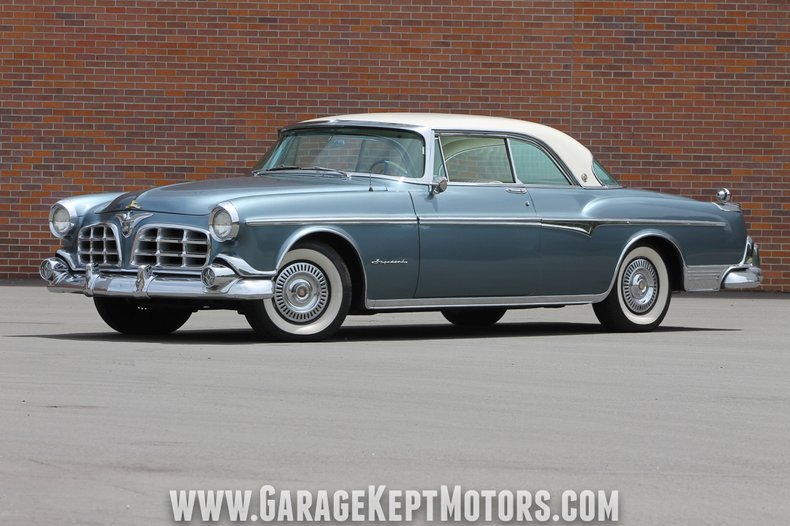 Chrysler's Cadillac, less than 3,500 made

Offered here is one of the most underrated and rare classic cars available. In 1955, to compete with the higher trimmed GM Cadillac and Ford Lincoln, Chrysler released their own luxury “manufacturer.” Up to 1954, these cars were called Chrysler Imperials but for 1955, they dropped the Chrysler altogether and the carline was simply called “Imperial.” For all intents and purposes, it is a Chrysler C-300, the first HEMI-powered car that swept the NASCAR podium, dressed up with more chrome and more features. The most iconic being the “gunsight” taillights mounted on top of the rear fenders. Only 3,418 were made - talk about rare.

We are pleased to present this beautiful 1955 Imperial Newport 2-Door Hardtop for consideration. This car was originally purchased in 1955 by a high school student in St. Petersburg, Florida. That student held onto the car for 74 years until he decided to put it up for sale in 2012, when our client acquired it from an RM Auction. The first owner had completely restored the interior to original specifications, which included leather upholstery, but left the factory correct Rhapsody Blue Metallic paint untouched. The paint has now been restored to original specifications and this rust-free car stands tall. Minus some pitting on the exterior chrome, the car remains in excellent condition. Be sure to check out all the photos on our website, especially the engine bay and undercarriage.

The car is powered by the original 331ci/250hp 4bbl HEMI V8 mated to the factory Chrysler two-speed PowerFlite automatic transmission. The car fires on command and runs extremely well - like steering a 4,500lb cloud down the road. Power steering and power brakes were standard. Power windows, power seats, and factory AC were an upgraded option. The car also featured the first ever signal-seeking all-transistor radio. It is a remarkable car that was Chrysler's top model at the time. Cutting-edge features and incredible curb appeal. You won't find many this clean at this price point. Be sure to check out all the photos and video on our main website: Garage Kept Motors. There's also a cool Imperial Club website that has a ton of information: imperialclub.org

Call if interested or e-mail with any questions. Thank you for looking.