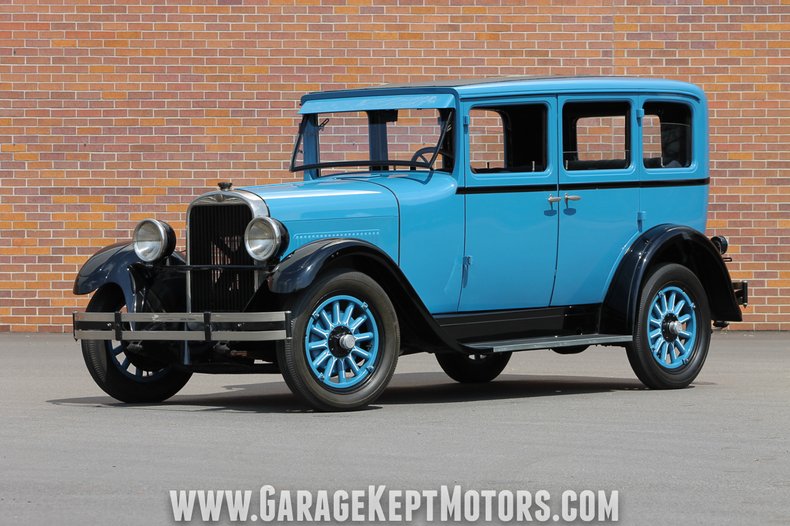 Garage Kept Motors is honored to offer one of cleanest and most original Pre-War cars we've ever seen. This 1928 Dodge Brothers 128 Sedan is owned by local Dodge Brothers Club members and is in immaculate condition from top to bottom. The club is “dedicated to the preservation of Dodge Brothers motor vehicles built 1914-1938” and this car is the pinnacle of their efforts. You will not find a cleaner one that has been kept this original on the market.

The car was restored when they bought it in a believed-to-be original two-tone blue and black paint finish. It is concours quality, as is the interior surfaces. This Model 128 is powered by the original 212ci/35hp 4-Cylinder engine with a 3-speed gearbox and rear-wheel drive. The car starts immediately on command with throttle available in the floor and steering wheel. The car is actually very easy to operate. The transmission shifts smooth, brakes and steers well, and offers an attention-grabbing driving experience. Other noteworthy features include a period-correct nickel front end bumper, headlight rings, and radiator, wood steering wheel, rear-window shade, suicide doors, running boards, vinyl roof, rear-mounted spare-wheel with authentic Dodge “The Fastest Four in America” slogan, paint-matching wooden wheels, “DB” center caps, dome light, dashboard wood trim, choke, and floor-foot ignition. Everything functions as it should, except for the wiper - removed because it was never driven in the rain.

Our clients purchased the vehicle out of Indiana three years ago and have gone through it in-depth to preserve its authenticity. They have replaced or upgraded the following components as OEM as possible: starter and battery cables, vacuum tank, front-end alignment, water pump and water pump shaft, all new gaskets, exhaust system, radiator, brakes, door straps, stainless steel window cranks (originals were pot metal and broke easily), U-joints, transmission, carb needle, and a new 6-volt battery in May 2018. Receipts and records for all of these improvements go with the car. Also accompanying the car is a handle full of priceless original documentation and magazines promoting the car when it was first released. It also has the original owners manual and Series 128 parts list.

We cannot reiterate how clean this car is. A collector vehicle worthy of any Mopar enthusiasts garage. Dodge Brothers examples like this don't come up for sale often, and at the asking price, it offers a unique investment opportunity. Be sure to check out all the photos and video on our website: Garage Kept Motors. Call if interested or e-mail with any questions. Thank you for looking.

Dodge Brothers History:
After producing engines, axles, and transmissions for Henry Fords' early cars from 1903 to 1913, John and Horace Dodge introduced their own automobile in November 1924. The car was named Dodge Brothers and was powered by a four-cylinder engine. That engine was in production for nearly 14 years. The very last car series using that engine was the Model 128. Because the Model 128 had the most improved and final version of the venerable four-cylinder engine, this version of the Dodge Brothers was given the unofficial nickname of “Fast Four.”

The Model 128 was built from mid-1927 to mid-1928. A few years earlier, Dodge Brothers had adopted a model year dating formula of July 1 to June 30. Therefore nearly all Model 128's were titled as 1928 vehicles. Once Model 128 production ceased in mid-1928, Dodge would not manufacture another four-cylinder car for 50 years. The next four-cylinder Dodge-built car was the 1978 Omni. Every Dodge Brothers vehicle was given a car serial number (that was separate and different from the motor number). The serial number for this car is A1008889. Using the serial number production chart, one can determine the approximate date this car was made (probably about Monday, December 12, 1927). See this chart on the inside rear cover of the Myers Early Dodge catalog. The serial number plate can be found on the right side toe board. The carpet must be unfastened and pulled up to expose this plate. This particular car was built just days after the transition from two-wheel brakes to four-wheel brakes. A majority of the Model 128's were built with the early-style brakes.

Beginning in the mid-1920s, six-cylinder cars started gaining favor with the public. Dodge Brothers quickly developed plans for a new six-cylinder car. The result was the Senior Six, a car with many deluxe features, followed six months later by the mid-range Victory Six. Two months later the entry level Standard Six was introduced which used the same bodies as the Model 128 four-cylinder car. The chassis, wheelbase, and hood from the Model 128 were lengthened two inches so that the six-cylinder engine would fit. Model 128s and Standard Sixes were built simultaneously for a few months in early 1928 before Model 128 production ended.

The calendar year 1928 was a huge watershed year for Dodge Brothers. By March of 1928, the company was producing four series of cars at the same time (128, Senior, Victory, and Standard). Then on July 31, 1928, Walter Chrysler bought Dodge Brothers in a stunning business transaction.During the 1930s, the word “Brothers” begin to disappear from advertising and other printed materials. Finally after the 1938 model production ended, the name “Dodge Brothers” disappeared from vehicle serial number plates and was relegated to history.