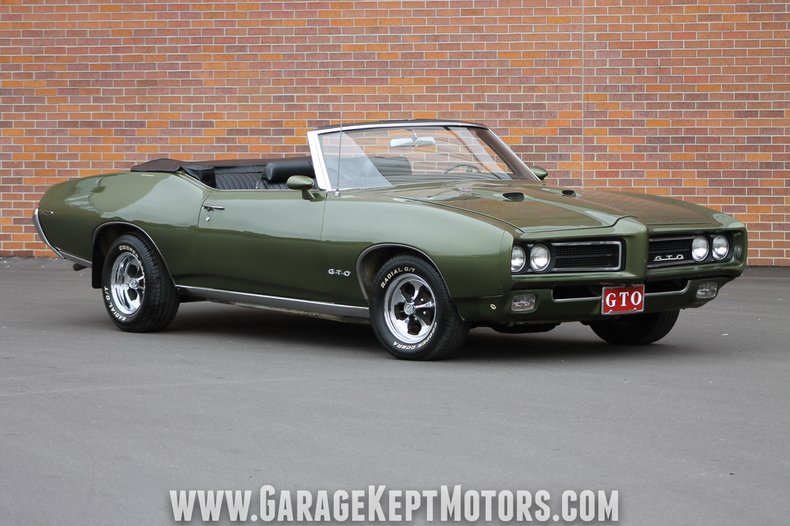 This is a special car. Not just because its a cool 1969 Pontiac GTO Convertible, but because this is the first car our client ever owned. He purchased the car on July 26, 1972, the year he graduated from high school and landed his first summer job at the factory. He bought the car through Berger Chevrolet from a woman's trade-in on a new Z28 Camaro, making him the second owner. The car had 40,250 miles.

In 1974, after driving too close behind a semi truck leaking a chemical that pitted the original paint, he had the car repainted in factory Verdoro Green (code 73). At the same time, the Firebird side mirrors were installed and the “400” decal was added on the hood. A new convertible top was installed in the early 1980s. There is also full detailed shop records going back to 1998. Our client decided to replace the wheels and tires, but kept the original wheels and wheel covers. The interior remains untouched. The spare in the trunk is the original. It also has the original owners manual.

The car is powered by the numbers matching 400ci/350hp V8 motor mated to a rare 3-speed manual transmission. It also has a power convertible top (works well) and dual exhaust. The car starts on command and runs well. It is an iconic '69 GTO Convertible with an awesome story. You don't find many of these that have been owned by the same owner for the past 45 years, especially in this condition. Most are sold multiple times with multiple levels of restoration or found in a barn long forgotten. This is a great surviving example offered at a Hagerty No. 3 value. We love the car and hope it finds a worthy new home. Call if interested or e-mail with any questions. Thank you for looking.