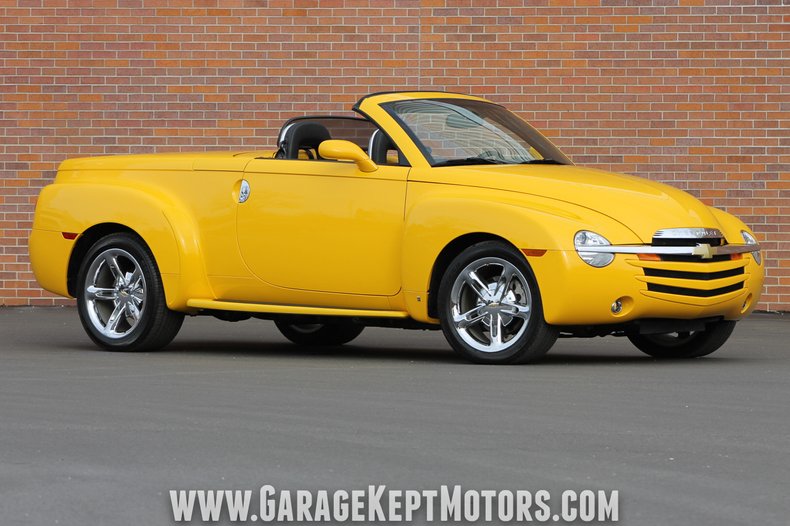 Offered here is a rare and highly-collectible 2006 Chevrolet SSR, the Super Sport Roadster, with just over 3,000 original miles. This is a Final Production Run example, which was badged on the final 896 SSRs that ran in 2006. The SSR was initially unveiled as a concept car at the 2000 Detroit Auto Show until making its official production debut in 2003. The SSR ran from 2003 to 2006, with the most optioned and powerful SSR released in 2006. It was powered by the C6 Corvette LS2 motor and the Tremec 6-Speed Manual transmission put out the highest horsepower, rated at 400hp.

This is a 6-Speed model with 400 horses, finished in factory Slingshot Yellow, and has the desirable Bright Chrome Package and 3SS package. Noteworthy features include the awesome power retractable hardtop roof, heated seats, chrome trim, Bose stereo system, wood-slotted bed, saddle bag storage, dual exhaust, SSR windscreen, running boards, and power everything. This was Chevrolet's Y2K masterpiece and came with over $8k in upgraded options. It comes with everything from the factory, including two sets of keys, manuals, trailer hitch (never used), car cover, and original window sticker. It also has some tasteful SSR badging, such as the door sills and under the hood/trunk, added by our client.

This FPR SSR is mint from top to bottom. It was brought to Michigan from the original owner in Washington State, and has been driven sparingly since. Always garage-kept and never driven in inclement weather. It is a remarkable vehicle and is worthy of any collectors garage. You won't find a nicer one with these factory options and such low miles. An awesome car offered at about the same price is came from the dealership. Call if interested or e-mail any questions. Thank you for looking.