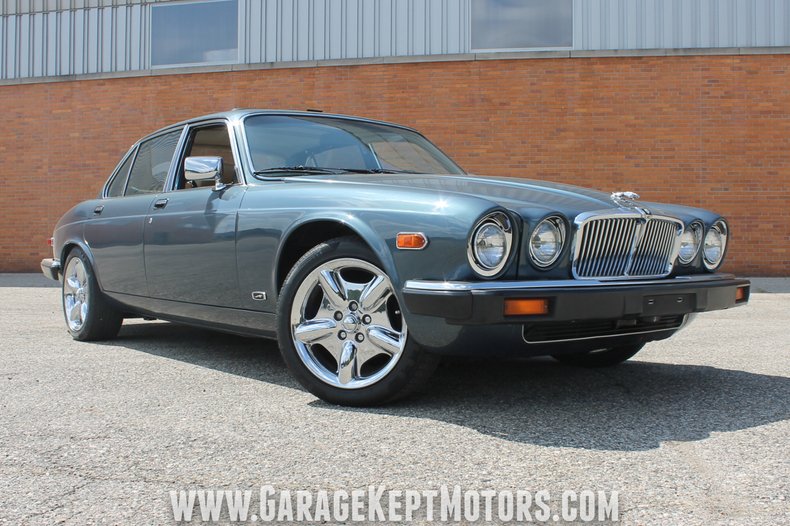 Offered here is one of the coolest cars you'll ever see: an awesomely modified 1983 Jaguar XJ6 Sedan. Ultra-high performance sedans like the S-Class, 7-Series, A8L or LS 460 were just not available back in the '80s. If you wanted a luxury sedan with supercar performance, you had to build your own. In that spirit, this 1983 Jaguar XJ6 Sedan was created. The car was located by its current and second owner at Mercedes-Benz of Escondido, where an elderly woman who had put 103,000 miles on the car during her 10-year ownership traded it in 1993.

While stately and smooth, the standard six-cylinder engine was replaced with a 425-hp, 355 cu. in. small-block Chevrolet that was heavily fortified for high performance duty. All running gear has been upgraded accordingly, and the interior has been refurbished and fitted with new leather seating surfaces and a 200-watt sound system with Bluetooth and MP3 connectivity.

The drivetrain includes a heavy-duty TCI 200R4 four-speed automatic transmission with 3,000-stall converter, a fully rebuilt heavy-duty driveshaft, and a rebuilt Jaguar rear end with special heavy-duty Posi unit and custom powder-coated cage. Other features include oversized aftermarket brake rotors and pads, a full 3-inch stainless steel exhaust system with Borla mufflers. Underpinnings include a super-heavy-duty rear sway bar, heavy-duty shocks and spring, and a painted and powder-coated undercarriage. It may look innocent, but it does not sound all that innocent! Nor does it run like a “normal” XJ6. Far from it! Even without the rarely used NOS system engaged, be sure you have it pointed straight when you give it full throttle.
The interior has been completely redone with softer-than-original but color-matched glove leather, a full complement of Stewart-Warner gauges, and a 200-watt Infinity/Sony/Kenwood sound system with full connectivity. TLC Auto Body of San Marcos performed the bodywork and applied the Jaguar Steel Blue Metallic paintwork. A new headliner, new windshield, titanium glass tint, and 18-inch Jaguar XK8 wheels with a fresh set of Pirellis complete this fantastic package.

A serious street machine with enough room for the whole family – the rear seat area is very spacious – this Jaguar resto-mod is guaranteed to attract attention and win respect wherever you travel. And while some purists are aghast when the hood is raised, others smile approvingly, as when this car was awarded third place overall at San Diego's prestigious “British Car Day” in 2006 and the People's Choice Award at the JAGM Concours d'Elegance during the Woodward Dream Cruise in 2014.


The car has well over $40,000 invested in restoration work, not even the price of the car. Call or e-mail if interested or to make a reasonable offer. Thank you for looking.