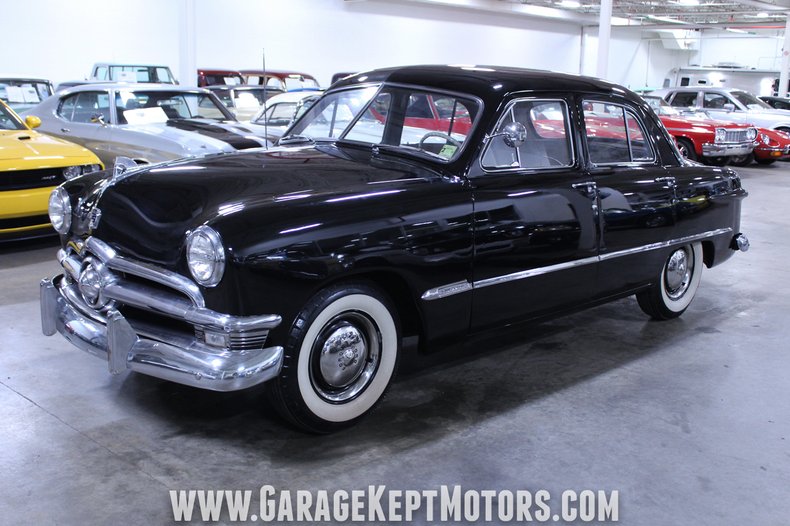 Offered here is one of the cleanest and original classic Fords we've ever had the privilege to bring to market. This 1950 Ford Custom Deluxe 4dr Fordor Sedan has ONLY 34,000 ORIGINAL MILES! The car remains highly original and is powered by the original, numbers matching 239ci/100hp 2bbl V8 motor mated to a “three-on-the-tree” manual transmission with overdrive and rear-wheel drive. Before being listed, the car was gone over with fluids changed and carburetor rebuilt. Service stickers dating back to 1968 are found on the inner driver door. It also has the original keys, owners manual, spare tire, and jack. The car is finished in beautiful black paint with clean chrome trim and accents. The gray cloth interior is original as is all the dash components. Be sure to check out over 100 photos on our website, including the undercarriage and definitely watch the video of the car staring and running. Even after sitting for a few weeks, the car fires up on command, effortlessly. It is an awesome car and a great value at the price offered here. They don't make them like this anymore and its almost impossible to find one this clean that hasn't been rotted out, let alone 34k original miles! Call or e-mail if interested, or to make a reasonable offer. Thank you for looking.

History of the 1949-1951 "Shoebox" Ford: When Ford introduced its new model for 1949, the car represented the Blue Oval's first clean-sheet design since World War II. In fact, it was the first postwar sheet metal shown by any of the Big Three. Everything about the 1949 Ford was new, except for the wheelbase and the powertrain. For the new car, Ford utilized a ladder-type frame and front independent suspension via coil springs and A-arms, and a Hotchkiss rear end with live axle and leaf springs. Power came from two tried and true engines: the 226-c.i. L-head straight-six or the 239-c.i. Flathead V-8, which produced 100 hp. All cars carried three-speed manual transmissions with optional overdrive, as Ford lacked an automatic of its own.Two trim levels were offered: Standard and Custom. Both were offered with the L-head or optionally with the V-8. Six-cylinder Standards included Tudor and Fordor sedans, along with business and club coupes, while Customs eliminated the business coupe but added a two-door convertible, as well as a two-door wood-bodied wagon. From a styling standpoint, the new Ford's adopted slab sides, wrap-around bumpers, minimal trim, and bullet-adorned grille set it apart from most other cars on the road. Despite a relatively hastened period of design and development, along with teething issues associated with such an abbreviated process, the new Fords were a hit, with 1.1 million units sold. For 1950, Ford worked out many of the noise and handling issues found in the first-year cars. Trims were renamed Deluxe and Custom Deluxe.