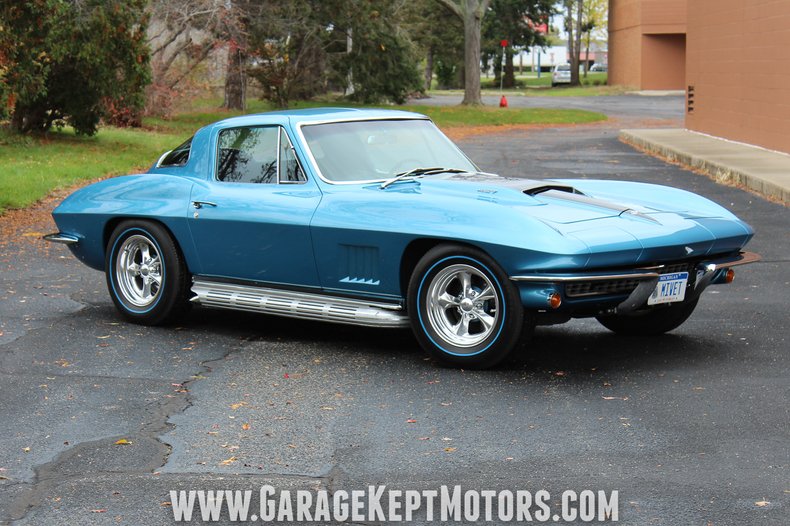 Offered here is a gorgeous final year of the mid-year Vette for consideration. This 1967 Chevrolet Corvette Coupe was fully restored by Pro Team Corvette of Napoleon, Ohio right before our client purchased it in 2006. Pro Team is one of the best in Corvette business and they didn't cut any corners with this Corvette. It is mint. So mint that it had a 3.5 year display at The Gilmore Car Museum of Hickory Corners, Michigan, which is one of the most exquisite car museums in the country. It was there from the Fall of 2008 to the Spring of 2012. Best in show pretty much guaranteed wherever you take this car.

The car is finished in factory original Marina Blue (code 976) over a newly upholstered leather interior. The car is powered by the original, numbers matching L71 427ci/435hp Tri-Power engine (block stamped 110831 - last 6 of the VIN). The 4-speed transmission and rear-end are also original. As you will notice from the photos, the original heads were replaced by 1968 aluminum heads to make it a tribute L89 car, as only 16 total of these Corvettes were ever built. Ty Mason, a local and legendary GM engine builder, did the head and carb work. The original heads do accompany the car. At 51,800 miles, the oil was changed and rear end was drained with new fluid added. It is ready for a new garage.

The car was believed to have been originally ordered new by a military officer stationed in Germany, as indicated by stickers on the driver door well and passenger fender. Our client also served in the military, which makes this Veteran-owned Vette even more special. Its been around the world and remains one of the classiest looking and performing Corvettes ever made. The body style completely changed in 1968, shifting to the C3, which makes this final year Vette highly sought after. Chevrolet does not offer an in depth Marti Report like Ford, but we do know only 8,504 Coupes were built in 1967 (14,436 Convertibles), 3,754 had the L71 engine, and 3,840 were finished in Marina Blue. A great car at a very reasonable price. The car also comes with an extra set of 4 wheels with correct GM original date stamp wrapped in Cooker redline tires with 300 miles. Be sure to check out over 100 photos and video on our website. Call or e-mail if interested. Thank you for looking.