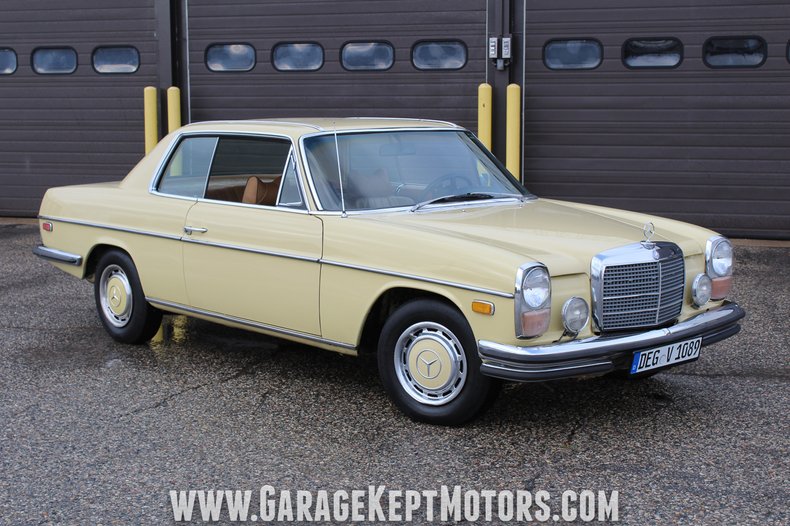 The car was then inherited by Roger's daughter, Andrea. In 1999 with 70,324 miles on the clock, she hired Alpine Motors of Grangeville, ID to do a complete and thorough engine rebuild for $3,083. Subsequent records with consistent maintenance all go with the car. Idaho doesn't use any salt on their roads, which is evident in the condition the car remains. Earlier this year, the car was acquired from the Davidson's and brought to Michigan. Oil change, air filter, and a new alternator were just installed. The car runs and drives well and comes with all service records from the original owners, Roger and Andrea, including an original dealer window slip and bill of sale from Lyle Pearson Company, a Mercedes and Volvo dealer in Boise.


The Mercedes 280C was in production from 1972 to 1976, and within those five years, only 13,151 units were made, an average of 2,630 per year. This 1973 example is finished in factory Maple Yellow over a Bamboo interior. The car is powered by the original 2.8L/130hp 4bbl 6-Cylinder motor mated to a column-shifted automatic transmission with rear-wheel drive. Its a pretty basic car yet has the nostalgic Mercedes curb appeal. It is an awesome little coupe at a very reasonable price. With all ownership history and records, you can purchase with confidence knowing the previous owners have continually cared for it. It also comes with all books, manuals, original radio, and original owners registration card. Call or e-mail if interested. Thank you for looking.