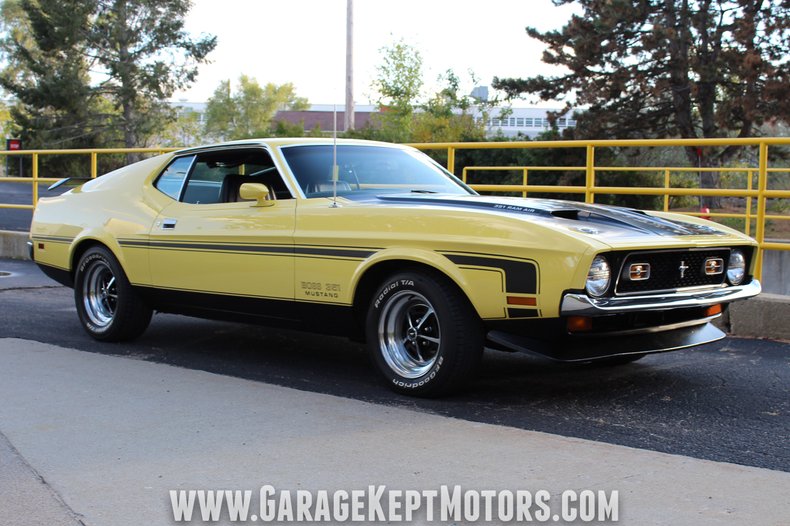 We are beyond excited to bring to market the quickest Mustang ever produced in the muscle car era. American manufactures rolled out some of the coolest, fastest, and now most collectible cars between 1964 and 1973. With just 1,806 total produced, Ford released their peak performer with the 1971 Ford Mustang Boss 351. The limited production Boss 351 replaced both the 302 and 429 Bosses from previous years. Rated at 330HP, the 351 had much better low-end response, and its equal weight distribution made for better handling as well as braking. It also proved to be quite quick, scoring one of the quickest quarter-mile times at 13.8 seconds @ 104mph. Zero to sixty in 5.8 seconds.

According to the Boss 351 registry, just 591 of the 1,806 (33%) cars are still accounted for. This is one of them. A true, documented R-Code Boss 351. Not a tribute and not a Mach 1 - the real deal. Only 344 of the 1,806 were painted Grabber Yellow, 184 had Black Standard Vinyl Seats, 62 came with Magnum Chrome 500 Wheels, and only 30 of them came with the Rear Deck Spoiler. Twenty-four Boss 351's came with Power Steering and only 13 had Center Consoles. The car features the original Hurst 4-Speed shifter, has the correct stamped block, and the 32k miles on the odometer are believed to be original.

This Boss comes with a Marti Report, original owner information, and even a Lois Eminger invoice. It is also THE CAR pictured in the official Boss Mustangs History poster pictured below. If you're on the hunt for an up and coming collector car, the Boss 351 should be on your short list. With its 302 and 429 predecessors already reaching 6-figure values, this car presents an incredible investment opportunity at the current asking price. Plus, you can't drive your stock portfolio :) Be sure to check out over 150 photos on our website plus a walk around video of the car running. Call or e-mail if interested, or to make an reasonable offer. Thank you for looking.