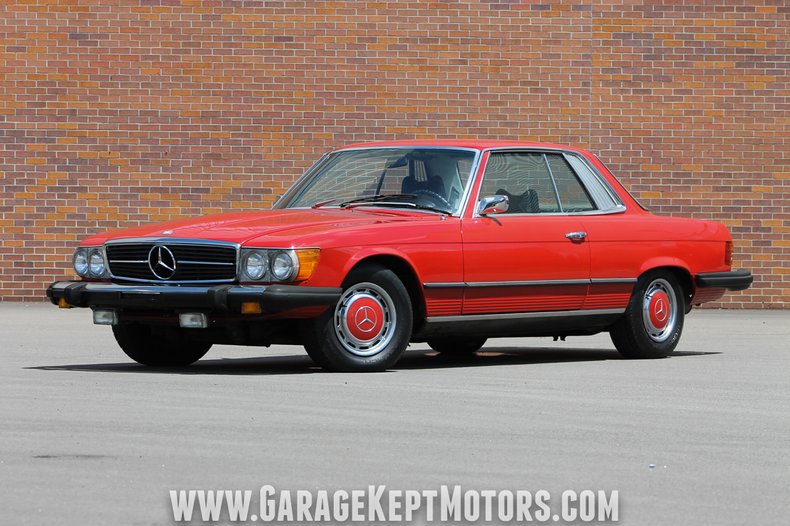 Offered here is a clean, rare, and highly original 1974 Mercedes-Benz 450SLC 2-Door Coupe. The car came out of Indiana, was owned by an older woman, and has always been stored in a climate controlled facility. The car is finished in factory English Red (MB568) over a black interior. It is powered by the original 4.5L/190hp V8 mated to a 3-speed automatic transmission with rear-wheel drive. This car has been gone through mechanically, is free of rust, and runs/drives well. It is a very cool, classic Benz at a very reasonable price, compared to the drop-to SL versions. It is also is more rare. 237,000 SL's were built but only 62,000 SLC's were made. Finding them in this condition is even more rare. Mileage is original, driver seat has just been resurfaced, and it has power windows. A great vehicle that will surely appreciate over time. Call or e-mail if interested. Thank you for looking.

Here's a short history on the SLC: In 1973, Mercedes-Benz introduced a practice that became standard operating procedure for their model lineup. Namely, the company released a closed version of their SL roadster called the 350SLC. Like the 350SL, the car embodied a certain level of automotive style and sophistication, and spawned a family of models that persisted relatively unchanged until 1989. With the R107, Mercedes debuted a V-8 engine in the convertible lineup, which was necessary given the new SL's relative girthy 3,400-pound weight. Styling was typically conservative and somewhat reminiscent of the pagoda top cars, and despite dimensions more or less the same, the R107 appeared to be much larger. The SLC coupes were very much similar in appearance to the hard-top-equipped convertibles, though they had a taller roofline and were 14 inches longer due to the presence of two usable rear seats. Mercedes-Benz 450SLC's engine was a 4.5-liter, fuel-injected V-8 that featured an overhead cam and delivered 230 horsepower. It was paired with a three-speed automatic, with no manual transmission to offer. Suspension was fully independent and four-wheel disc braking was standard. For 1973, the car's name was revised to match the engine's displacement, and 450SLC would be the model designation moving forward. Also revised this year was the way in which horsepower was rated, and the new SAE net meant the 450SLC's power was listed at 190 hp. The following year, the 450SLC grew large safety bumpers front and rear in keeping with federal regulations. In 1975, emissions requirements reduced output to 180 hp with the addition of a catalytic converter. In 1976, the SLC was fitted with a continuous fuel injection system, as well as transistorized ignition. Two years later, in 1978, Mercedes introduced automatic climate control and 14-inch aluminum wheels as standard equipment. The cars went unchanged in 1979, and in 1980, the fuel injection system was revised, further cutting power from 180 hp to 160 hp. The 450SLC model ended production with the 1980 model year, and its 380SLC replacement would carry the torch into the 1980s. Prices are significantly discounted when compared to the convertibles, which can be a bargain depending on driving habits.