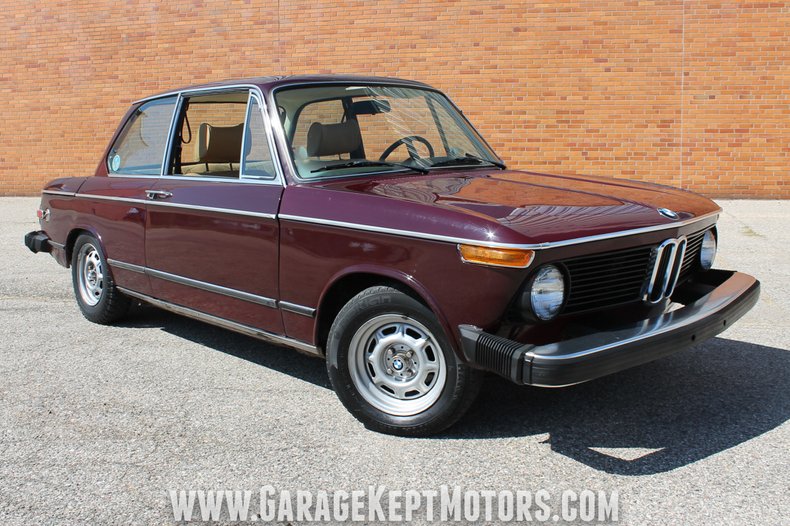 The BMW 2002 was built for 10 years, starting in 1966. This 1976 example marks the final year for 2002 production as it was replaced by the 1502 model. This example is finished in factory original Malaga red over a very clean Tan interior. The car is powered by the original 2.0L/100hp 4-cylinder engine mated to a 4-speed manual transmission. The car is pretty basic with no power options but stars, runs, and drives well. It is truly an icon and people smile at every corner.

Here's some more history on the 2002 from Hagerty's website: The 2002 is perhaps the most famous of BMW's “New Class” line, and it revitalized the Bavarian automaker's historically underwhelming international reputation. The world was captivated by the 2002's attractive blend of power, agility and style in addition to its reasonable price tag. 2002's were offered in two varieties in the U.S.: the single carb'ed, 100hp base 2002, and the über-sporty 2002tii. Both were powered by a 2.0 liter SOHC I4, but the tii added mechanical fuel injection to wring out 130hp. Other variations included the cabriolet, targa, a three-door touring model, a twin-carbureted ti and a rare turbo, all intended for European consumption only. 1973 yielded a major aesthetic redesign, supplanting rectangular taillights for round ones, and adding elongated bumpers to meet U.S. safety regulations. The availability of parts for these cars is nearly limitless. In 2005, BMW even constructed a “new” 1972 tii almost entirely from its vast supply of replacement parts.

1976 was indeed the final year, which makes this one highly sought after. It is not perfect cosmetically, which is reflected in the price, but could make the perfect classic commuter in the big city or a weekend driver to the cottage. A lot to work with here and the price on this car will certainly continue to appreciate over time. Call or e-mail if interested, or to make a reasonable offer. Thank you for looking.