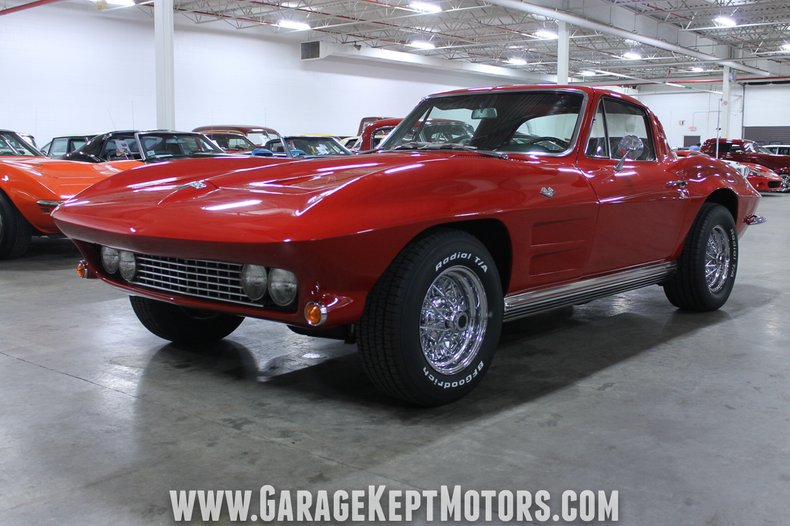 This tastefully modified 1964 Chevrolet Corvette Coupe has been owned by the same West Michigan man since 1975! 42 years later and he has decided to finally part with it as he just doesn't drive it as much as he used to. He purchased it from a Michigan State Trooper who owned it since new. Over the years, he has had it restored with a new frame, new paint, rebuilt motor, etc. and as it stands today for sale, it is one-cool machine. Only 8,304 Coupes were built in 1964, which was less than the convertibles.

This mid-year Vette is finished in factory Riverside Red (923) and has that beautiful fastback sloping rear end. It is powered by a rebuilt numbers matching RC block 327ci/250hp V8 mated to a 4-speed manual gearbox that has been upgraded with a Hurst shifter. It runs extremely well and is a blast to drive (be sure to watch video). Other upgrades include a high rise Holley Carb, chrome spoke wheels with new tires, new brakes, and fiberglass leaf springs. The most noticeable alteration is the front of the car. The often problematic pop-up headlights ave been completely removed with lower lights installed in the grill. It has always been stored in a climate controlled facility and remains rust-free (see undercarriage photos).

You will be hard-pressed to find another C2 that has been owned by the same man since 1975. It even comes with the original Michigan title issues in '75. The car is mechanically and cosmetically sound, and ready is now ready for a new garage. Call or e-mail if interested. Thank you for looking.