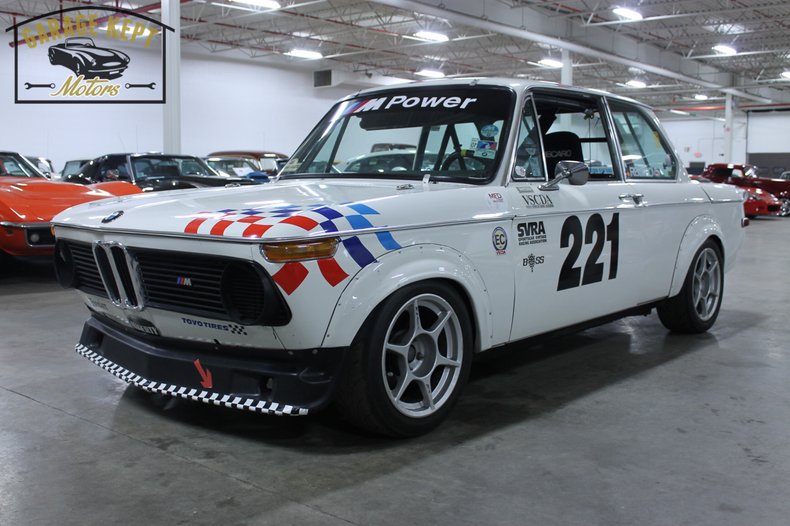 Offered here is a one-of-a-kind 1972 BMW 2002ti Race Car. It was professionally built and has been the promotional car for a top-class insurance company, with some famous driver's signatures displayed on the bonnet. See below.

The car was originally purchased in Chicago, Illinois in 1997 and was completely rust free.  At that point, it was taken to a full Race Car transformation: EC VSCDA “Era Correct Production Class” registered Number 362. The drivetrain was all rebuilt (new motor, transmission, differential and half shafts), and has only 4 hours on current components.  The M10 motor has E12 heads ported and polished, including headers, which is still in confinement of the legal requirements for Vintage Classic car racing. The entire build of this car has been documented with schematic drawings, diagrams, build sheets, specific set up for particular races / tracks, jetting for the carb, and misc. documentation. All included with the sale.

This iconic BMW is current to be raced in it's next event. The log book is VSCDA current and dated from 2014-2007.  The car has raced at several Midwest tracks: Mid Ohio, ELVF Road America, Grattan, Gingerman, Sebring (12 hours), Watkins Glen, Kohler International, Road Atlanta, Savannah, and Roebling Road.  The car has also raced in the SVRA 2012 Enduro and the Empire Hill Climb. This race car is well known throughout the country. Race car drivers TC Kline, Christian Maloof, Joey Hand, Bill Auberlen, Tom Milner, Randy Pobst, and Duck Waddle are a few that have signed the car.  Their signatures are preserved on the hood of the car. See photos.

This particular car was sponsored by Hagerty Insurance as a test pilot marketing venture for insuring race cars and car haulers to and from the track, which ended being a success. This car has been on display a few times at the Hagerty Corporate Office, in Traverse City, Michigan, most recently in April 2017.

We have not seen a better documented and recorded car come through our facility. The owner of this race car is also available after the purchase to go over specifics of the car so that the new owner has the opportunity to know everything about their competitive race car and set them up for success. Call or e-mail for more information. Thank you for looking.