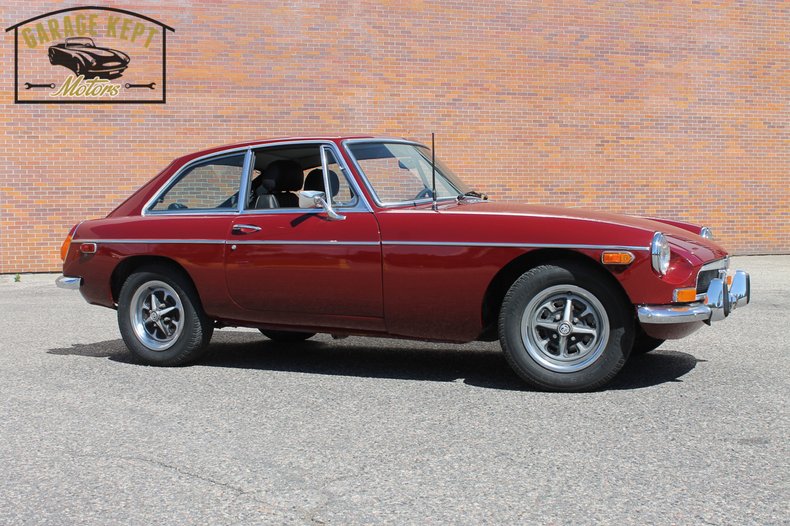 Offered here is a two-owner, 55,000-mile 1973 MG MGB GT Coupe. This car was purchased and imported new to its final destination in Ann Arbor by a University of Michigan professor in 1973. Our client, an Alpena, MI native, purchased the car in April of 1984 and has owned it ever since. Besides a decade old re-spray in factory Carmine, new carpet, new Black leather seats, a rebuilt Weber carb, and a new radiator and fuel lines installed this spring, the car remains 100-percent original.

This little British GT coupe is powered by the original 1.8L (1798cc)/78.5hp 4-Cylinder motor mated to the original 4-speed manual gearbox with rear-wheel drive. The car was just serviced by Downtown Union 76, a specialty shop in Alpena; it starts, runs, and drives exceptionally well. The car also comes with the original spare, owner's manual, shop book, parts book, extra carpeting pieces, and two sets of keys, including the originals. The 33-year owner has tried to keep this car as original as possible and has always stored it in a climate-controlled garage.

1973 marked the final full year of the chrome-bumper before the switch to rubber. This car was produced in October of 1972, just a couple months after the first 1973 models started production in August. It is an awesome car for a very reasonable price – you will be hard-pressed to find another one this clean with all ownership history and low miles. Call or e-mail if interested. Thank you for looking.