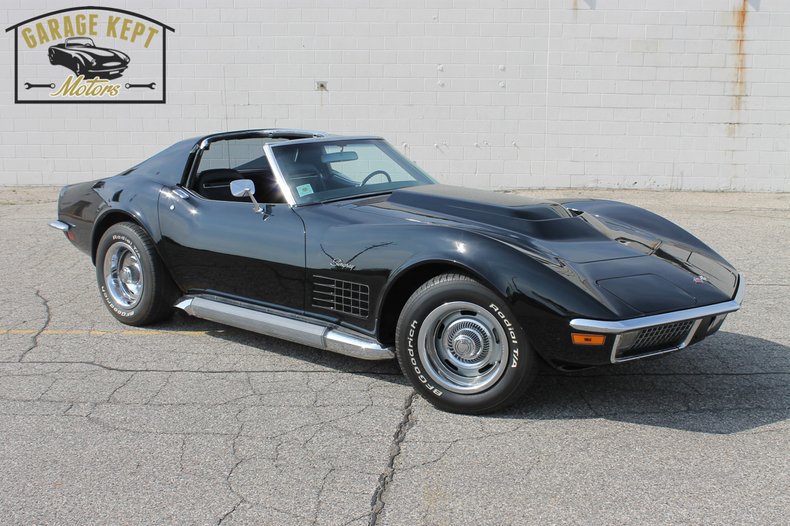 Make sure you watch the video!

Offered here is one of the cleanest and meanest C3 Corvettes we've ever driven. This car has been meticulously restored and has had over $40k invested in the engine alone. The car is powered by a professionally built 454 V8 that was engine-dynoed at 600hp. It is a monster, and with a 4-speed transmission, a blast to drive. The owner also installed electronic exhaust cutouts for a throaty rumble when you want to boast about what's under the L88 style hood.

Although modified, this car does retain many original components. Our need-for-speed client purchased the car in 1995 from a Chicago native whose uncle had purchased the car brand new. He had the car in a barn since 1971 with just 9,333 original miles on the clock. The mileage on the car today, some 20,500, is the true mileage on this car. When it was pulled out of the barn in 1995, it was finished in a faded blue. But, if you're building sleeper C3, Black was the appropriate color choice. The interior and all bodywork remains 100-percent original. All the lights, switches, and gauges still work too. The restoration was completed 10 years ago and besides the impressive powerplant, all that was altered was the paint and re-chroming the bumpers. It does also have preserved old-stock 1969 side pipes, original T-Tops, and it was given a fresh tune-up this spring.

There are a lot of C3's on the market, but none like this car. It is the nicest shifting and handling classic Vette we've ever driven. No expense was spared in making it an incredible driving machine. If you love the body lines on the third gens but also enjoy some power under in the gas pedal, this is the car for you. There won't be another one like it on the road, and if an imitator stares you down at the stoplight, you can leave them in the dust. It truly is the perfect harmony of classic style and power. Again, make sure you watch the video. Call or e-mail with any questions. Thank you for looking.