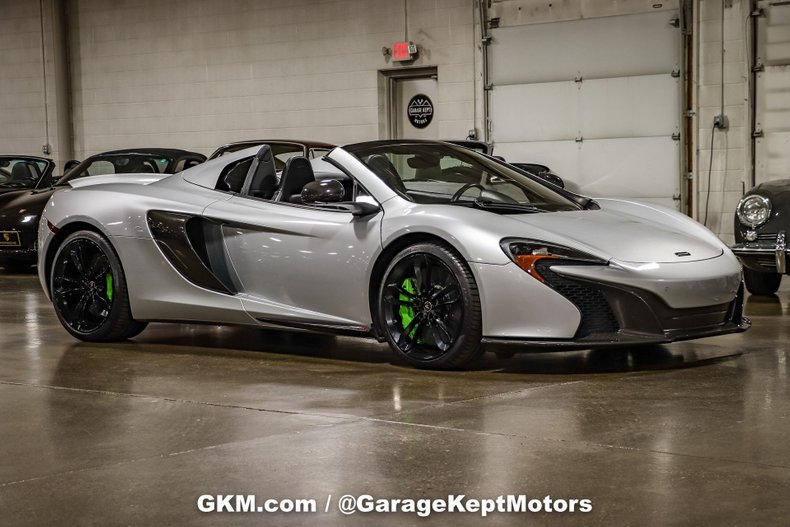 To many, the 650S looks as though it's a 12C with a few visual updates, but under the skin there is much more going on. The details of the amazing technology and engineering is a list longer than your arms, which means we could probably write a lengthy description, but we trust that someone looking at this car has a good feel for what an amazing car this is. The car you see here is a 2016 McLaren 650S Spider finished in Ice Silver over black leather interior.

There seem to be so many vehicle designs that age quickly, however this car's shape and design looks current. Many design details on the car help set it apart from other exotics, like the curves used in the McLaren logo which are mimicked throughout the exterior. Carbon Fiber trim, which on previous models would have been optional at a cost of over $20k is now standard, and can be found on exterior surfaces like the front bumper, mirrors, side blades, side vents, and rear bumper. The body is covered in Ice Silver metallic paint, which shows nicely. Black alloy wheels wrapped in Pirelli PZero tires are 19” in the front and 20” in the rear. Peeking from behind the awesome split five spoke wheels are bright green brake calipers, which add a little extra visual interest to the car. The wail of the V8 is made even easier to hear thanks to the car being a Spider. The engine cover is visible through a small window on the rear decklid, just in front of the active rear spoiler.

Opening the doors of the car takes a little getting used to the first few times, but the access to the interior thanks to the large opening makes it worth it. Once settled in one of the bolstered sport seats, it's easy to see that you're in a body tub, albeit a luxurious one. Supple leather trim is found on many interior surfaces other than the seats. The carbon fiber trimmed center console includes a large media and vehicle settings screen, with the climate control interface, start button, and launch control button just below it.

Launch is something that this car does well and with conviction. Moving from a stop to 60 mph is said to be attainable in 3 seconds, which will knock your head back. This is all possible thanks to the 3.8 Liter V8 which is twin turbocharged. A dual clutch automated manual or SSG as McLaren like to call it (Seamless Shift Gearbox) bangs and pops through the gears lightning fast as the car is accelerating. It's also docile enough to drive the car in everyday traffic or road conditions. This 650S was recently serviced at McLaren of Troy Michigan, and looks to have been well kept in the years since it rolled out of the factory in the UK.

Thanks to the awesome design of the McLaren vehicles of the past 10 years, their cars are memorable and eye-catching. Not to mention the aerodynamics achieved in conjunction with the design is extraordinary. The engine note of this 650S is incredible, and much “throatier” than many exotic counterparts that have a much higher pitch. It's a beautiful car that is one to impress with its performance capabilities and design features. Please call if interested or e-mail with specific questions. Thanks for looking.