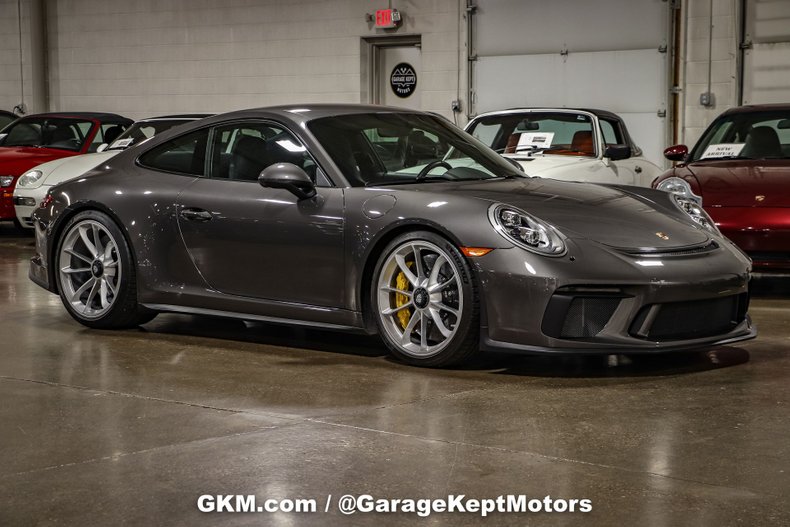 
Here we have yet another iteration of the iconic, and immediately recognizable, Porsche 911. This one comes in the form of the GT3 model. Porsche continues the tradition of upgrading looks, performance, and handling with well engineered and thought out changes to the 911. All while maintaining that classic 911 shape and styling. We're excited to offer this gorgeous, low mileage, Slate Grey 911 GT3 Touring for your consideration.

Eagle eyed Porsche enthusiasts will immediately notice the absence of a fixed rear spoiler, which is the first outward hint that the car is a GT3 Touring. However, being the powerful performance Porsche that it is, the Touring has a special variation of a retractable spoiler. Similar in shape and movement to retractable spoilers seen on other 911's, this spoiler deploys at a slightly more aggressive angle. The lack of a fixed rear spoiler equates to slightly less attention from others on the road, and a slightly lower top speed. But rest assured, a GT3 Touring will still blow your proverbial hair back.

The car is finished in Slate Gray, which despite being a pretty muted color, still makes it easy to see that this car is a contoured and curvy 911. All the other GT3 styling cues are there, from the aggressive front bumper to the vented rear bumper. Other exterior styling cues include a vented upper portion of the front bumper, LED lighting, mesh rear engine cover, and center exit exhaust pipes. Multi-spoke center lock wheels wrapped in Michelin Pilot tires add to the sporty look of the exterior.

As you would expect, the interior of the GT3 Touring is a nice place to be. This car's interior is finished in black with leather and alcantara, with a small amount of aluminum trim, all of which provide a luxury feel. The leather trimmed seats feature a cloth center section, and the Porsche crest embossed on the headrest. Rear seats were deleted at the factory. The headliner is finished in Alcantara, as well as the A, B, and C pillars. Interior amenities abound with the first few worth mentioning being heated seats, dual zone climate control, navigation, and XM radio. There are a number of parameters shared with the driver through the 5 gauges on the dashboard. Those parameters include much more than the typical Porsche 911 analog information like RPM's, vehicle speed, and fuel level. Coolant temp, oil temp, oil pressure, g-force, a performance gauge based on power at rpm, lap timer, and tire pressure information are all easily accessible in the gauge cluster. The steering wheel is kept simple - it's just a steering wheel, which is a bit of an anomaly these days in a newer vehicle like this GT3.

The heart of this special car comes in the form of a naturally aspirated 4.0 Liter Flat 6, which pumps out 500 horsepower. The engine is rev happy and the 9k rpm redline can be reached without too much coaxing. GT3 Touring are the only GT3 cars of this generation that get manual transmissions. The six speed manual transmission notches into gear properly, with a nice throw. The no nonsense feel is great for spirited driving. The manual transmission doesn't give you the lightning fast shifts from the automated PDK transmission, but the car certainly gives you a more of an analog feel thanks to the manual transmission. Other driver assist systems as well as advanced engineered components like the mechanical limited slip differential, torque vectoring, traction control, and electronic stability control are helpful in keeping the car planted and pointed in the right direction, for those who are not experienced race car drivers.

Year after year, Porsche continues to entice enthusiasts with awesome variations of the iconic 911. This GT3 Touring definitely deserves a place among the amazing 911 variations that have been on the market recently. Those who know the 911 and all the iterations will tell you that if you have the means, it is highly recommended to consider a GT3 for your own garage.
Having only covered just over 2,500 miles, this GT3 Touring is a prime example of a special Porsche. Please call if interested or e-mail with specific questions. Thank you for looking.