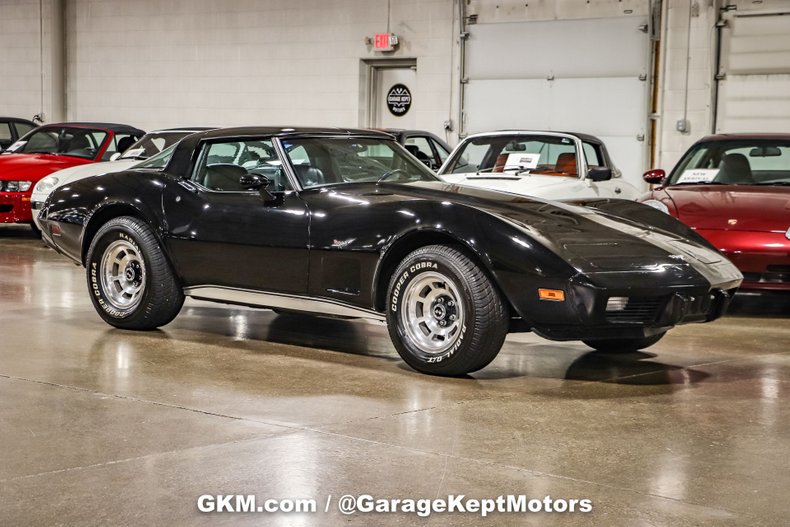 In 1979, the Corvette remained an American sports car mainstay, while in the same year, Sony introduced the revolutionary Walkman, and consumers were introduced to Honey Nut Cheerios. While adults were jumping at the chance to own a Corvette, kids were introduced to McDonald's first Happy Meals, and fans were clamoring for a copy of Michael Jackson's new album Off The Wall. When the 1979 Corvette hit showrooms, it remained a clean, sleek sports car with the same basic shape as the Corvettes of the very early C3 Generation. The early C3 Generation cars had a number of differences, with the most prominent being the chrome bumpers front and rear. While this car doesn't have the extra chrome trim, it represents the change from lots of chrome, to color matched bumpers which gave the Corvette a slightly smoother look.

We are happy to offer this black on black 1979 Corvette for your consideration. Taking a glance at the car makes it apparent that it has been well cared for over the years. Sleek black paint over a black interior, alloy wheels, T-tops, and an automatic transmission are just a few of the highlights of this car.

Shiny black cars always look great when cleaned up, and this car is no different. Muscular sleek shape of the , you can't help but to take a good look at it and really examine the lines the whole length of the car. With that tidbit of information, you can see in our many pictures that the paint does look a little shaky in a few spots. Blemishes can be seen when looking up close at the car. Speaking of paint, the T-tops are not glass as can be seen in later Corvette Generations, but hey you still have versatility, and who can resist taking the T-tops off and taking a cruise? Alloy slotted wheels are in great condition, and are wrapped in Cooper Cobra white letter tires.

As you would expect in a Corvette, black bucket seats are a focal point of the interior. The interior has been well kept and features power windows, three spoke steering wheel, center console mounted auxiliary gauges, and a Sony cassette player. Unlike the earlier C3 Corvettes, this car has a square gauge binnacle rather than the individual tachometer and speedometer gauges. However, the car still gives passengers the feeling of being wrapped in a special car thanks to the low seating position.

Under the hood is a familiar 350ci V8 mated to a 3 speed automatic transmission. The VIN having an 8 in the fifth position decodes as a L48 V8 engine, which is considered the base engine. However, it was an engine which produced a good amount of torque, providing drivers enough power to have fun with.

Today's world is much different than the time that this Corvette rolled off the showroom floor. We walk around today with the equivalent of computers in our pockets, and struggle to get anything done without the help of the internet, but that doesn't mean you can't enjoy a classic American sports car like this '79 Corvette. Sleek styling, a V8 under the hood, and T-tops equate to a car that's ready to hit the road and put a smile on your face. Please call if interested or e-mail with specific questions. Thank you for looking.