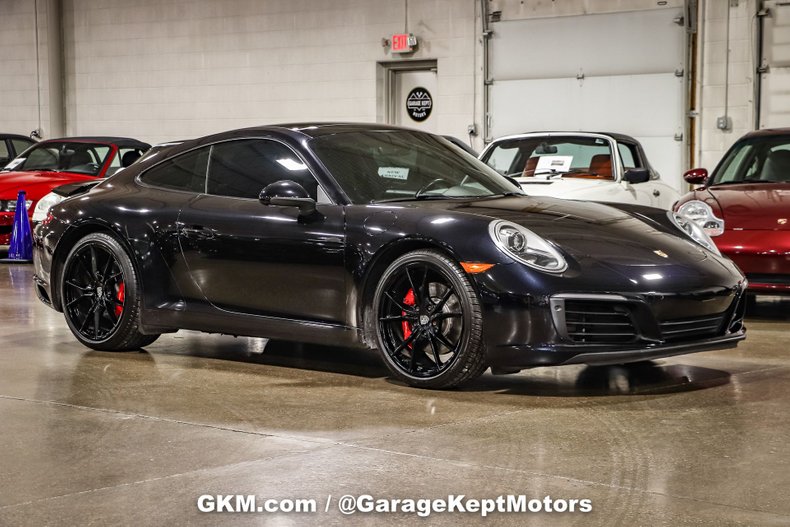 “What's in a name?” According to the old saying, those four words imply that consideration must be taken to understand a title, ranking, or place in a hierarchy or family. In this case, we are talking about the 911 Carrera family. The car offered for your consideration is a Carrera S, which thanks to a Porsche's new approach with engines, is a slight departure from Porsche's traditional naming nomenclature. You see this car has turbos, but is not called a Carrera Turbo. Odd, but there is a method to the madness in Stuttgart. The “S”, which we understand denotes “Sport”, means a difference of about 50 horsepower more than a “base” Carrera. We use the term “standard” loosely, since even the “base” or “standard” Carreras are amazing cars. With today's technology it is fairly easy for manufacturers to create different engine variations and power using the same base engine. This car is ready to put a big grin on a new owner's face. For your consideration is this Night Blue Metallic Carrera S coupe.

It's an understated color on a performance car which is capable of throwing you back in your seat at the blink of an eye. The Night Blue Metallic exterior is understated until the car is in bright sunlight, then the beauty of the color comes out. Paired with the blue paint are black Porsche wheels wrapped in Bridgestone tires. Another hint of the performance capabilities are red brake calipers front and rear, which really pop against the surrounding dark colors. The factory Carrera S badging at the rear of the car has been omitted, which may be an effort to fly under the radar a little bit. Other exterior highlights are LED lighting, sunroof, quad exhaust tips, and an active rear spoiler.

A luxurious interior full of controls for all the various driver assist systems, and comfort and convenience options is no surprise in this car. Among the controls are options for traction control, suspension settings, “Sport” mode settings, spoiler settings, and stability control settings. Seating surfaces are black leather, while an alcantara headliner and black carpeting finish off the interior styling.

At the rear of the car is a 3.0 Liter twin turbocharged Flat-6 engine. Boost is the big difference in the engine department, as the extra power is produced by allowing the Turbos to create more boost. 16 psi to be exact. More boost means more power, which means a bigger grin on drivers faces. For those who remember that the Porsche Turbo cars were the only Carreras that had turbochargers strapped to the engine, this is a peculiar idea. Porsche still sells the 911 Turbo, but as with past generations, Carreras badged only as “Turbo” are toward the top of the line in the power production game. This Carrera S offers 420 horsepower, which will leave you on a high after a good punch of the throttle. A 7-speed manual transmission handles gear selection, giving the car longer legs for high speed cruising.

Sure, to Porsche purists it is a bit odd to have a Carrera which is not badged simply as “Turbo” and to have a turbo - or two - strapped to the engine. As you would expect though, Porsche has the 3.0 liter twin turbo engine which is mounted at the rear of this car all dialed in. Torque, and power delivery are sure to put your head back on the seat, and a smile on your face. This car's iconic Carrera shape finished in Night Blue Metallic, over black leather interior makes for a beautiful car. Make room in your life for a few extra, and maybe unexpected, turbochargers. They're sure to boost your mood. Please call if interested or e-mail with specific questions. Thank you for looking.