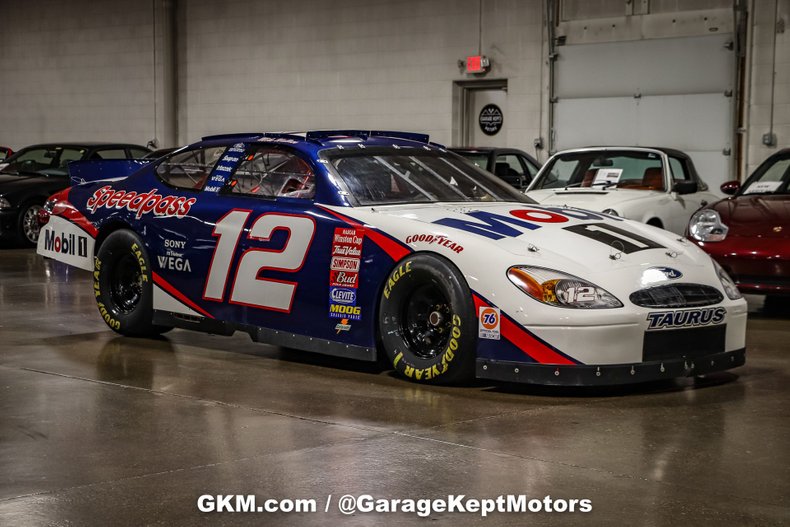 - Jeremy Mayfield first half of year, Mike Wallace second half
- Full blown superspeedway car for big tracks (Daytona and Talladega)
- Same car as it came off the track, except doesn't have superspeedway restricted plate motor 440hp. It has a NASCAR Tim Petty rebuilt (dyno'd time only) NASCAR at 800hp Tim Petty
- Actual Drysump motor needs to be oil primed before starting
- This car was given to Mike Wallace from Roger Penske as a gift to help finishing the race year in 2001.
- Tags in the trunk showing it qualified Daytona.
- Not a NASCAR battery
- Seat, wiring, gauges, fans is as it was when it came off the track.

Garage Kept Motors is excited to feature this 2001 NASCAR Ford Taurus Cup Series Race Car. Very little of these Gen-4 NASCAR Cup Series cars resemble the factory models of the showroom cars. That probably seems obvious as the Ford Taurus was a never offered in production as a two door, but with Ford announcing that 1998 would be the last year for the Thunderbird, Ford looked to the Taurus to represent in the Blue Oval in the NASCAR series.

The bodies of these Gen-4 Cup cars featured fiberglass panels rather than steel for lighter weight. And while the bumpers, nose and tail resembled the showroom adaptations of these cars (at least the stickers made them seem that way!), the rest of the car was subjected to rigorous wind tunnel tuning and shaping to gain an advantage over the other teams. In fact, in an effort to level the playing field, NASCAR required Ford, Chevrolet and Pontiac stock car teams be subjected to fit under a “common long template” rule. The result was some very competitive racing in NASCAR when these cars were in competition. This car was raced by both Mike Wallace the first half of the season and later finished the year with Jeremy Mayfield at the wheel. It is reported that Roger Penske gifted the car to Wallace at the end of the season as token of his appreciation for his contributions to the team.

This car is a perfect time capsule of the 2001 season looking today and equipped as it was then on race day. The body features the red, white and blue color scheme carried by the team that season and decorated with the #12 and with the sponsors from that season. Inside the cockpit is race ready, well at least for the 2001 season, as it remains the way it was outfitted for that season. Keep in mind this is the same season racing legend Dale Earnhardt died and the cockpit safety changed significantly after that year. Features include full padded roll cage, aluminum floor panels, driver racing seat and related Simpson safety harness and equipment, along with dash mounted AutoMeter gauges and switch controls.

Under the hood sits a NASCAR 358cid Ford V8 built and prepped by Tim Petty and produces 800hp. This motor has never been raced and only dyno'd. The engine features a dry sump that requires the oil system to be primed prior to being fired. The power is transferred to a 4-speed manual gearbox and back to the Ford 9” rear differential equipped with 3.25:1 gears and features a differential cooler. Power meets the pavement via steel racing wheels wrapped in Goodyear Racing Tires.

This car is essentially prepped for racing on the super speedways such as Talladega and Daytona with the exception it is equipped with the larger horsepower motor rather than the 440hp restrictor plate motor required for those tracks. The tags in the trunk substantiate this car was used in qualifying at Daytona and was a back-up for Taladaga. It should be noted the battery however is not NASCAR spec. This car is an outstanding collectible, please call if interested or e-mail with specific questions. Thank you for looking.