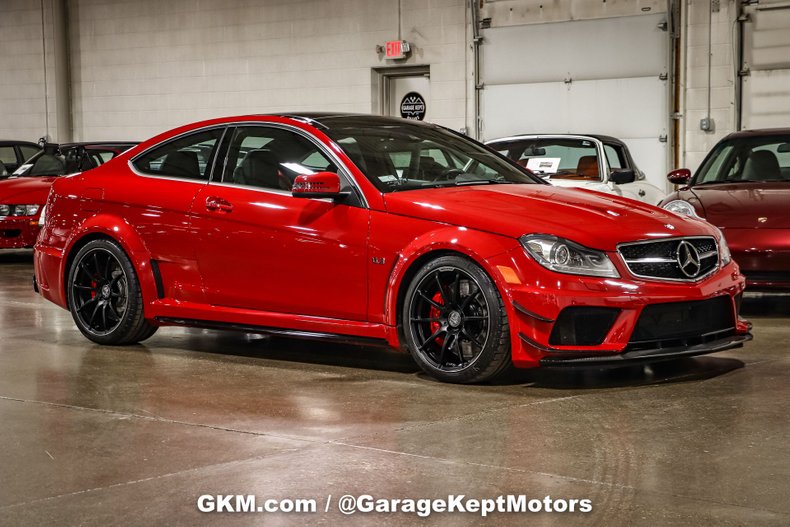 
In any subgroup of enthusiasts or collectors, there are always a few individuals who always like to have something a bit different, or unique, compared to anyone else in that particular subgroup. Oftentimes enhancing or individualizing a vehicle is done by changing wheels, stance, styling, and even engine specifications set your vehicle apart from others. Forget all of that with a car like this, AMG has done the work for you. The final product is a jaw dropping car built to perform. If owning a vehicle which is one of a limited number interests you, please keep reading. We have a beautiful and very rare vehicle for your consideration, this is truly a unique opportunity to own a special car. And, we can assure you that the chances of running into anyone else who owns a red C63 AMG Black Series is slim to none.

Offered here is a stunning Mercedes Benz C63 AMG Black Series. This car is one of 6 sold for the US Market finished in Mars Red. This Mercedes is truly a car which is extremely hard to avert your eyes from. Just over 19,500 miles show on the odometer. The car was meticulously cared for by our client (and AMG enthusiast) who is the second owner, and has owned the car for approximately 8 years. The car was always dealer serviced, and was often seen at Mercedes Club events, or AMG events.

Mars Red hugs the tastefully exaggerated curves, which the “P98” Black Series cars like this one possess. At the front of the car is a chiseled front bumper with large openings, and carbon fiber splitter and canards, which are factory options as part of the Aero Package. The typical C-Class hood ornament has been replaced by a flat Mercedes Benz logo. Additionally a pair of rear facing vents, which almost look like nostrils, are carved into the hood, presumably for aiding in engine cooling. A side profile of the car shows the car's black extended side skirts, carbon fiber rear spoiler, and forged 19” AMG wheels. Behind the front wheels are 15.4” brake discs, which are clamped by red 6-piston calipers. 4-piston calipers work in conjunction with 14” discs at the rear of the car. As one would expect from an AMG car, the suspension consists of top of the line components, including KW suspension at the front of the car which is adjustable.

In the cabin are well bolstered leather and alcantara clad seats, which have yards of tasteful red stitching woven throughout, and a Harmon Kardon sound system offers the chance to clearly hear your music. Quite honestly, we would rather hear the soundtrack of the 6.3 liter V8, but the high end sound system is there should you choose to use it. As one would expect from a German supercar, Teutonic thoroughness is a great way to describe the interior. Compared to many supercars, it's a simple and functional space, with a few small pieces of flair in the form of the small AMG badge found on the speedometer, or the “6.3L V8” script on the analog tachometer. They're just subtle reminders of what you are driving. A few other reminders that the car is a Autobahn Burner are an alcantara shift knob, and a section of alcantara on the steering wheel. Both items have red stitching. Red seat belts add another splash of color, and carbon fiber panels add some race car appeal to the interior aesthetic. Other interior options include heated seats, dual zone climate control, bluetooth connectivity, sunroof, and even cup holders.

Fans of AMG Mercedes V8 powered race cars will appreciate that the engine found in this car is an engine that many AMG race car engines were based upon. Which is a testament to the robustness of the engine, not to mention the power output. The claim of 510 horsepower is said to be a little conservative; under promise and over deliver, as you do. The naturally aspirated V8 engine shares a few components with the Mercedes Benz SLS in the form of a lightweight crankshaft, connecting rods, and forged pistons. The result is said to be an engine that delivers even power throughout the torque band. It goes without saying that the engine note is magnificent, as the sound exits the four AMG embossed chrome exhaust tips. As we mentioned earlier, the car has always been dealer serviced, and the odometer now shows just 19,665 miles.