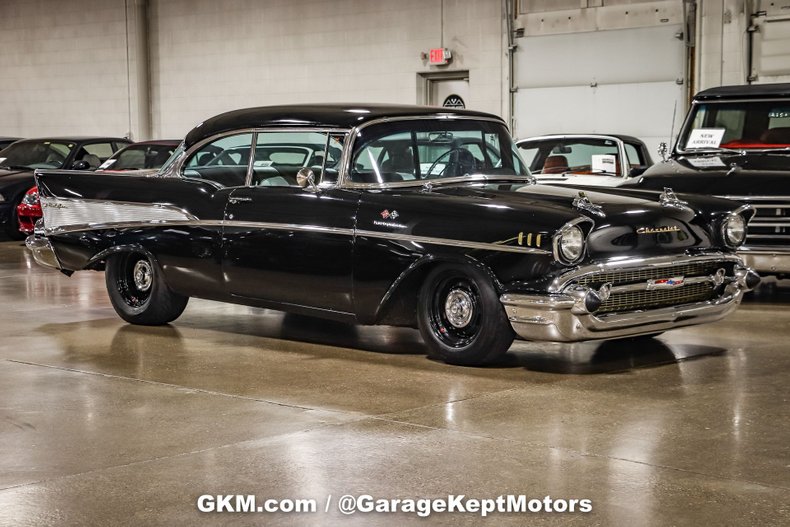 One could certainly make the argument the most recognizable car on planet is the iconic 1957 Chevrolet Bel Air. These cars would be followed up in popularity closely by its siblings the '55 and '56 Chevrolet Bel Airs and related models on this platform that make up what has come to be known as the Tri-Fives. By the mid-50's the generation that has been referred to as the “America's Greatest Generation” had returned from World War II, married their best girl who had been waiting for them at home, and used their GI Bill money to purchase a house in the suburbs and had filling their homes with “tri-cycle motors”, aka: children. Chevrolet had it right with the 1957 Chevrolet, it was a reliable car, that ran well, rode well and honestly looked amazing; they were and still are great cars. Chevrolet offered over 100 options for the new car buyer to choose from in 1957 including 6-cylinder powerplants to even fuel injected V8 Corvette engines and an amazing array of trim and color combinations literally making it easy to go to the Chevrolet Dealer and check the right boxes to have a car custom built to your liking and setting you apart from the other Chevrolet owners in your neighborhood. Of course, families were hitting the highways in these cars, “seeing the USA in their Chevrolet” and building memories along the way. Most families would sell off their cars every 3-5 years and purchase a new one, but 1957 Chevrolet Bel Air owners kept their cars, they had become members of the family. Sure, they bought a new model a few years later but now they had young drivers growing up in their homes who need a car to safely drive. These cars often stayed in in families through several drivers in the home giving a whole other generation of drivers an opportunity drive them, build new memories and full in Love with these cars. The next generation of teen drivers often souped these cars up which made them all-stars among the cars cruising the boulevards in the early 1960's as the budding youth market, aka; the Muscle Car era was beginning. Not everyone could afford a new GTO, but a mechanically inclined frugal driver could easily build a competitive car on a budget out of any Chevy Tri-Five and there were millions built by GM so there were lots of them to rebuild on a budjet. The 1957 Chevrolet Bel Air featured here is a perfect example of why these cars are so popular then and continue to be today.

This Chevrolet Bel Air has been treated to a tasteful resto-mod. The restoration is older showing some light wear around the edges, which is understandable for a car that was built to be driven and has been! This car originated in California and the build is based on a rust-free frame and body. The black paint is an older refinish well applied over professionally executed bodywork. The paint was buffed and polished to a deep luster that still shines through, despite a few chips and some light swirl scratches. The chrome and stainless trim are all present and was either restored, replaced or re-chromed during the restoration process and still presents with a nice brilliance. The headlights have been upgraded to Halogen lights for improved night driving as well as improved LED blinker and taillights. The fenders are decorated with the infamous Fuel injection emblems hinting to something special under the hood.

Opening the massive hood one can see that the fender emblems are not a rouse because sitting in between the fender wells is a Chevrolet Performance Ram Jet 350cid V8. These modern Chevrolet factory crate motors featuring a Ram Jet induction that mimics the 50's/60's era mechanical fuel injection Chevrolet offered at the time, however this system is much more! It features electronically controlled port fuel injection and electronic ignition producing 350hp @ 5200rpm with 400ft. lbs of torque at 3500rpm. The engine compartment is clean and well maintained showing some light patina. Power is transferred to a traditional 4 speed transmission shifted with a Hurst shifter.

Inside the cabin has been fully restored with a stock fabric combination made up of silver and black vinyl upholstery with factory textured black fabric inserts. Door panels, rear panels, carpet, and headliner were all replaced during the restoration and has been well maintained showing little if any wear and features a set of front and rear custom floor mats with the Bel Air emblem. The dash is all stock and the original Lucite steering wheel with chrome horn ring has been restored and is still in place. Other than the padded dash there are no options. The trunk is clean and fully restored featuring a reproduction factory vinyl floor mat. The battery has been relocated to the rear trunk and a fire extinguisher is present.

Underneath the car the suspension was treated to a complete rebuild during the restoration and painted and detailed but now is a little dirty from being driven. The frame and floorboards are clean and rust free. The steering has been upgraded to power hydraulic assist, with power front disc brakes and rear drums. The rear end has been lowered with 2” blocks and the front-end features lowered springs with matching gas shocks that give this Black Bel Air a racy stance. The Combination rolls on a set 15 X 8 Corvette rally rims painted black to match the body with low profile “Disc Brake” stainless steel center caps and are wrapped in Mickey Thompson Radial Racing tires.

The Tri-Five Chevys, especially the 1957 model year, were cars that touched multi-generational enthusiasts who either enjoyed these cars when they were new or have experienced them as their first car handed down to them providing freedom to teen drivers only found on the road free from your parents. This car tastefully and timelessly captures what makes these cars so popular and will continue to capture the hearts of car collectors worldwide who want to relive the finest times to live and explore the USA. Which explains why these cars continue to be so collectible and hold their value 70 years later. Please call if interested or e-mail with specific questions. Thanks for looking.