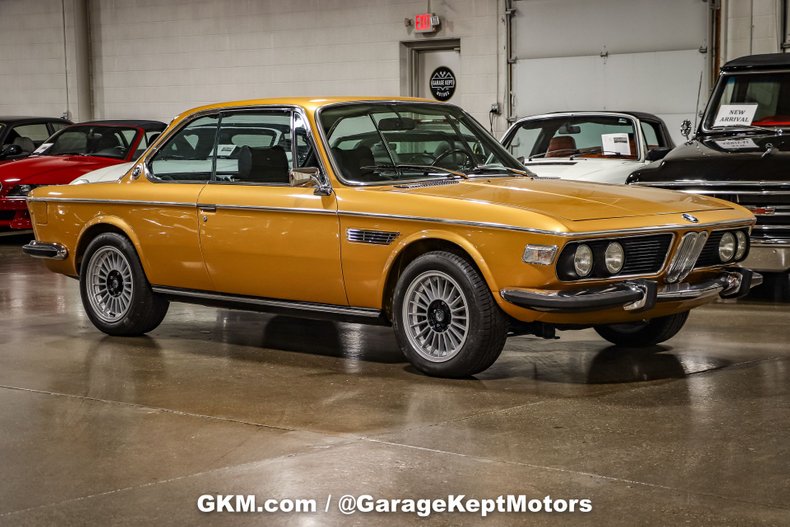 
BMW set a few Milestones with the 3.0 series cars, from race cars to art cars. The “batmobile” 3.0 CSL cars were a force to be reckoned with on the race track, and the first of the art car series vehicles were decorated by Alexander Calder and Frank Stella. Part of the beautiful design of the 3.0 series cars is that these cars were one of a few BMW coupes that feature the Hofmeister Kink and a BMW roundel within inches of each other. The 3.0CSi is a luxury coupe which combines power, comfort, and timeless design.

When looking at the front of this beautiful car at any angle, the “kidney grilles” are unmistakable as they protrude just a little further than the dual round headlights. Classic BMW lines give this car a muscular stance, and the color is beautiful. Chrome side strakes and chrome trim provide a little contrast as they run down portions of the chiseled body. All the trim is in great condition, as are the lights.

According to the Karmann coachworks trim tag, this car left the factory finished in the color of Siena Brown (code 9), which was a hue that had a bit more of a darker red tone. It's now finished in Ceylon Metallic (code 8), which suits the car well. There are no outward indicators of the color change, and the paint has obviously been professionally applied. High gloss finish, panel fitment dialed in, and clear glass free of delamination are good indicators that the restoration and subsequent ownership and use of this car were on point. Alpina badged multi-spoke alloy wheels wrapped in Sumitomo tires give the car a slightly sportier look than other wheels often seen on these cars. New seals and gaskets throughout the body are soft and supple, and rubber on the bumpers is in very nice condition. A plate holder which may have been used for a rectangular German plate remains, and folds down a few degrees to reveal the trunk lock/button.

As you would expect, the interior is comfortable, and a great place to be whether in the driver's seat or any one of the passenger's seats. Cloth trimmed, bolstered bucket seats, a large steering wheel, and a wood trimmed upper dashboard with clear gauges are focal points in the car's thoughtfully designed interior. No-nonsense VDO gauges provide info regarding vital engine functions, and we should note that the speedometer reads in kilometers per hour. A modern stereo is nestled just in front of the shifter, and below the array of vents for the HVAC system. In the center console, a wood shift knob tops the shifter, and rocker switches for the window controls are neatly organized. The large glass 'greenhouse' of the car is further personified when rolling all the windows down thanks to an absence of a B-Pillar. Windows down cruising on a sunny day in this car are sure to leave you smiling.

Long intake runners are the focal point once the forward canting hood is opened. The engine bay is clean and well detailed with all the expected hoses, fasteners, reservoirs, and stickers displayed. A noticeable absence of carburetors is something that eagle-eyed enthusiasts may notice right away. BMW offered the carbureted CS, and the fuel injected version like this car. A 4-speed manual transmission is mated to the Inline-6 under the hood. Each gear slots into position with an affirming click from the shifter.

This is your chance to own a classic BMW, which can be a piece of rolling art of your own. This car is a beautiful example of a 3.0 CSi thanks to a detailed restoration. Rolling all the windows down and taking this car for a cruise on a sunny day is sure to result in a smile on your face. Wunderbar!