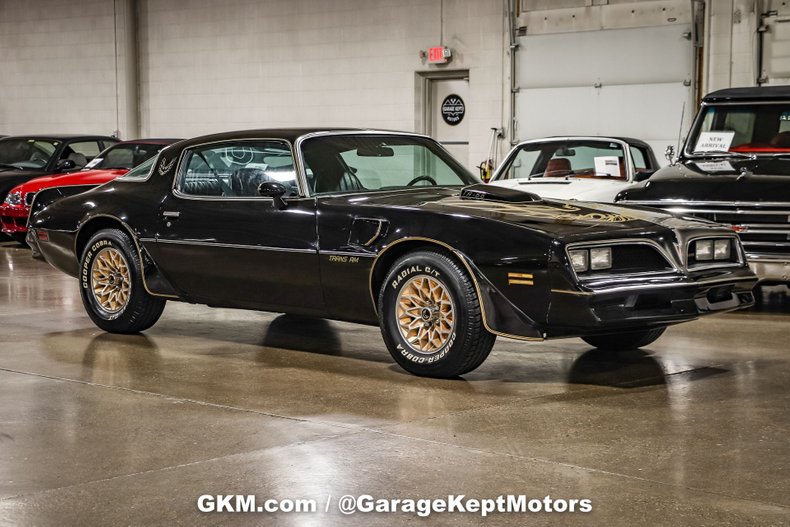 Garage Kept Motors is very excited to feature this 1978 Pontiac Trans Am for sale. By the mid-'70s little was left of the muscle car market that had been thriving 5 years earlier. However, insurance and safety regulations, and a fuel crisis had all but diminished the existence of performance-oriented cars. But during these dark times for car enthusiasts, Pontiac was still flying the muscle car flag with their flagship Pontiac Trans Am. In the 1970s Pontiac Trans Am sales remained healthy, but they soon exploded after a low-budget movie called "Smokey and the Bandit" hit the theatre screens in 1977 The movie had plenty of star power with Jerry Reed, Sally Field, Jackie Gleason, and of course Burt Reynolds. However, the real star of the movie was a black Pontiac Trans Am. It is thought this car was a 1977, however in reality, it was a 1976 with 1977 front sheet metal. Production had not yet begun for the 1977 model year when the movie began filming, so Pontiac provided four cars for the film from the previous model year outfitted with 1977 front ends. Sales immediately rose to 68,745 units for 1977 after the film's release. Sales continued to soar in 1978 with 93,351, half of the total production of Firebirds that year. Needless to say, these cars remain popular today among enthusiasts and collector car buyers.

The example featured here was originally sold in California. It's an example that has been repainted much like Burt's 'Bird in the classic movie, black over black. This car was originally blue and now has an older black refinish that is showing some age. The correct gold pinstriping adorns the body, along with the full aerodynamic package which includes front, rear, and wheel opening spoilers and rear-facing shaker hood scoop. This car also features the correct era “screaming chicken” decals on the hood and roof pillars.

The black interior presents nicely. The front seats have been re-upholstered, new carpet has been installed, and the remaining interior looks to be original. The engine-turned dash insert frames the factory instrumentation. Gauges include a clock, tachometer, 100 mph speedometer, oil pressure, coolant temperature, voltmeter, and fuel level. This car comes equipped with factory A/C and power windows. The factory radio has been upgraded to a Pioneer AM/FM/CD with aux input and Bluetooth capability, and the tunes play through a set of JL Audio 6X9 3-way speakers mounted in the rear package tray. The trunk compartment is clean and is finished with black speckle trunk paint. A new trunk mat has been installed, and the original stowaway spare tire is still in place.

Under the hood sits the 403cid V8, which came in California-sold Trans Ams. The venerable V8 presents as unmolested, well maintained, and has been lightly detailed. The factory smog controls are still in place, and recent service includes new alternator, clutch fan, fuel pump, and starter, spark plugs, wires, and distributor cap.

The underneath is unrestored but very clean and the underbody has been lightly undercoated and rust-free. Power is transferred through a GM 3-Speed Automatic Turbo-Hydramatic Transmission to a 10-bolt Safe-T-Track differential with 2.47:1 rear gears. The exhaust features a cross-over headpipe that flows into a catalytic convertor "test pipe" into a new Cat-back stainless-steel exhaust system with Magnaflow performance mufflers and dual splitter chrome tailpipe tips. The brakes were recently serviced including a new master cylinder, front calipers, brake pads, and front rubber brake lines. Front stabilizer bar bushings have also been replaced. The car rolls on a set of original-style Pontiac 15X7 cast aluminum “snowflake” wheels wrapped in Cooper Cobra Radial G/T tires.

This T/A is well documented with the original window sticker and dealer invoice paperwork. It is a really a great driver that is sure to attract plenty of attention as you cruise your local boulevard or highway. Just be sure and keep an eye out for Smokey! Please call if interested or e-mail with specific questions. Thanks for looking.