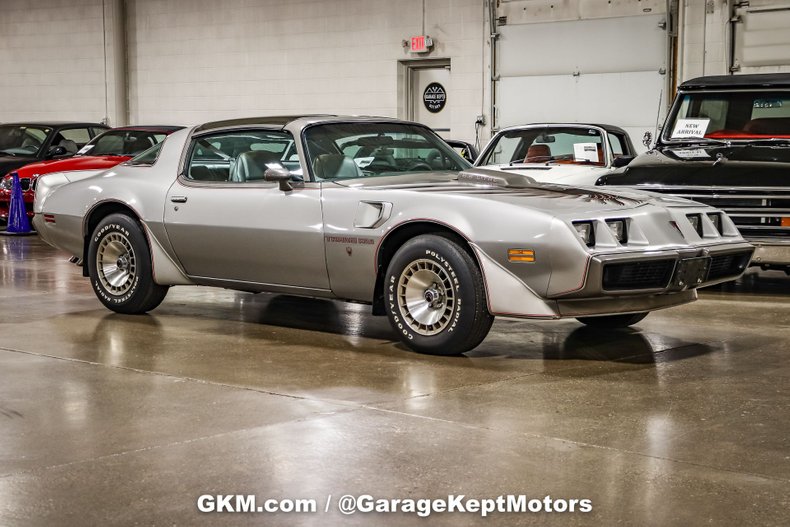 1979 was a big year for the Pontiac Trans Am. Sales continued to grow to over the 200,000 mark, which was the highest amount of vehicles sold since the model was first released in 1969. In fact, over half of the Firebirds produced that year were Trans Ams. Gone this year was the Firebird “Batmobile” like beak front nose which was replaced with a redesigned Endura bumper. This bumper style made the headlight treatment a pair of molded bezels. The taillights were redesigned and given a blackout treatment. Since 1979 was the 10th Anniversary of the Trans Am, Pontiac commemorated the milestone with a 10th Anniversary Limited Edition. Pontiac produced only 7500 of these cars that all featured special paint treatment, graphics, and wheels to name a few details.

Featured here is a very clean example of the highly collectible 1979 Pontiac Firebird 10th Anniversary Trans Am. The paint finish presents as original, and has been well maintained with only a few small chips on the paint finish. The paint shines with a nice luster. All the 10thAnniversary cars were fully optioned. The silver and charcoal paint scheme came was met with an updated “super-bird” graphic on the hood with wing tips that extended to the tops of the fenders. This car rolls on the original specially designed cast aluminum 15X8 turbo wheels with factory-correct Goodyear Polysteel Radials.

The interior is decorated in silver and gray tones that match the exterior theme. The cabin has been well maintained and shows very little wear on the upholstery or the carpet. The special edition styling continues inside with embroidered Firebird logos on the inside door panels and in the center of the rear seat. A special leather-wrapped Formula steering wheel is another nice option. This car came fully loaded featuring a tilt steering column, power windows and locks, pulse wipers, air conditioning, power seats, rear defogger, cruise control, and power trunk release. The factory gauges are framed in engine-turned dash treatment. The gauges are backlit in red, which was unique to the 10th Anniversary cars. The factory Delco AM/FM with an 8-track and digital display, is still in place. We should mention that the sale of this car even includes several 8-track tapes. The trunk is clean and factory original, with the stowaway spare complete with the factory inflator and the factory scissor-style jack.

Under the hood sits the 403cid Oldsmobile V8. The engine compartment has been kept clean and left original. Power is transferred through a 3-speed Turbo Hydra-Matic 350 automatic transmission to an 8.5 GM 10 bolt Safe-T- Track differential with 2.73:1 gears. The underbody is in its original unrestored condition. The floorboards are clean and rust-free, and the gas tank was recently replaced. As an Anniversary Trans Am this car came standard with the WS6 special handling package, power four-wheel disc brakes, and power steering.

Also included in the sale of this very special Trans Am are a few great collectibles; a Trans Am belt buckle, a 1:18 diecast metal model, a vintage plastic model kit of the car, and several repair manuals. The later 2nd generation Trans Ams like this one, have remained popular since new. Low production 10th Anniversary cars are even more collectible. This is a fun car to drive and is always well-received at car shows and cruise-in events with smiles and thumbs up! Please call if interested or e-mail with specific questions. Thanks for looking.